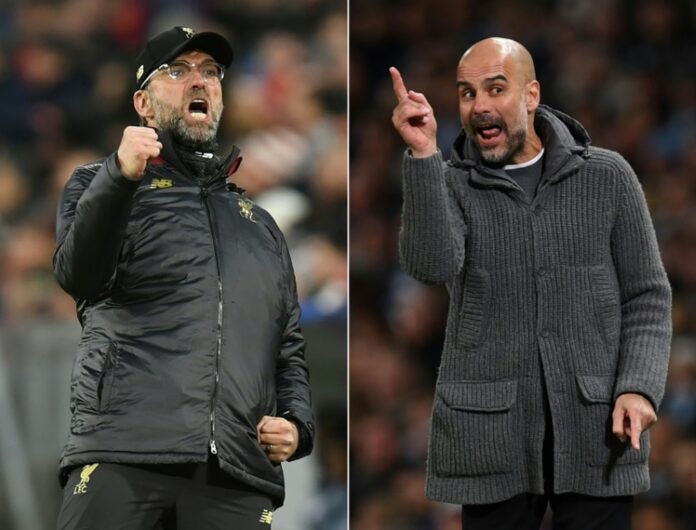 Liverpool and Manchester City boss will go head to head as rivalry returns at Anfield between these two sides in the Premier League. Playing against the Reds will be a tough one for Pep Guardiola despite his tactical master class like we've seen in recent years.

And with Jurgen Klopp's side very much in form at the moment following their midweek success story in Europe, expect them to pull the trigger when they face up with Manchester City.

Klopp may not make do with the exploit of Dutch star Georginio Wijnaldum but Curtis Jones has proven the good works Klopp is doing at the club amid his manager input among the players.

Guardiola would hope his team turns up in terms of their individual performance. But it remains to be seen if the Spaniard manager can motivate his players pretty well as they file out in the tunnel against Liverpool.

Klopp's managerial skills present him as the better handler here as the German tactician has a way of getting the best of his players.

The undue communication of his passion to the players via his goal celebration like that of Antonio Conte is very much interesting to see while the team is spurned on to do more on the pitch.

Guardiola may not be the best man-manager following his sentiments against certain players he's managed like Samuel Eto'O and Kelechi Iheanacho who've left the club and are still being relevant in the game.

He's also had a row with Zlatan Ibrahimovic at Barcelona with the outspoken Swede star criticizing his coaching rudiment and his personality.

While Klopp on his own case had beef with defender Mamadou Sakho during his formative (early) days at Anfield.

But the way he's managed the Liverpool squad has been notably impressive especially with Liverpool's not too spending spree like other top sides like Chelsea, Manchester United, and PSG has done in recent times.

But Guardiola's inability to win the UEFA Champions League since his five years reign at the club remains a question mark to his managerial credentials at the moment.

Despite the money Manchester City has splashed over the years, the Etihad side is yet to win (come up with) the European crown the same as PSG is seeking with the signing of Lionel Messi this summer.

It remains to be seen if Guardiola would achieve the feat before leaving City as a manager while he continues his coaching rivalry with Klopp like they did in the German Bundesliga with Bayern Munich and Borussia Dortmund respectively.

Klopp has created harmony among the fans and his players thus showing how good a tactician and a manager he is when compared to Guardiola's stakes and familiarity at Manchester City.