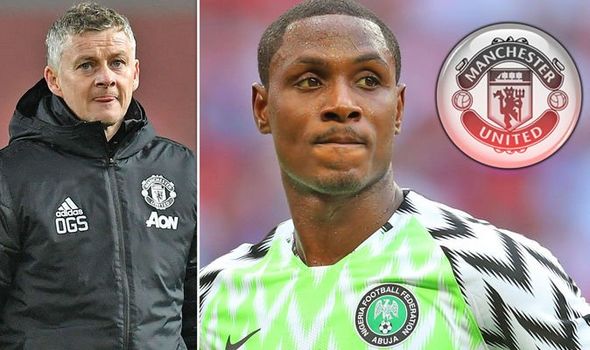 Former Super Eagles striker, Odion Ighalo's reason for snubbing a move to Tottenham has been revealed to be because he has been a Manchester United fan since he was a child.

The Red Devils signed the 30-year-old from Shanghai Shenhua on loan until the end of the season on deadline day in their search for a striker that can replace Marcus Rashford upfront.

JUST IN: Furious Zidane To Quit Real Madrid Over Pogba

United had been linked with various strikers throughout the January transfer window.

However, Ole Gunnar Solskjaer’s side opted for Ighalo, who was also being targeted by Spurs to fill in for the injured Harry Kane.

According to Fabrizio Romano, Ighalo turned down Tottenham in favour of the team he grew up admiring as a child.

Romano tweeted: “Odion Ighalo to Manchester United, here we go! Total agreement with Shanghai Shenhua for a loan with buy option. He’ll fly to UK during the weekend. #MUFC #ManUnited.

“Tottenham called him but the player decided for Man Utd – he’s #MUFC fan since he was a kid.”

Ighalo’s agent Atta Aneke celebrated the Nigeria international’s big move to Old Trafford on Twitter by sharing an old photo of him as a boy playing with his friends in a United shirt.

Solskjaer praised Ighalo’s talent as well as experience and claimed he will provide a lot of options in attack.