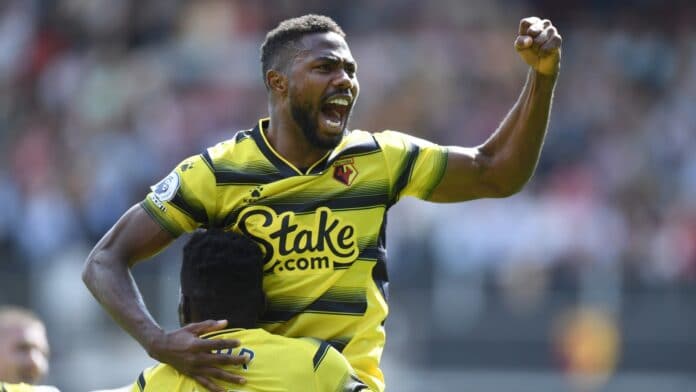 Watford striker Emmanuel Dennis is reportedly on the radar of the 2020/21 UEFA Europa League champions, Villarreal.

The Nigerian attacker moved from Belgian Jupiler Pro League club Club Brugge in the summer to Vicarage Road for an undisclosed fee (rumoured to be €4 million) on a five-year deal.

He has since contributed 10 goals and six assists to their season, the most in the club this season and the third most for the club in the top flight. However, it has proven to not be enough and the club are set to return to the second division of English football next season.

Dennis has been reported to be on the club's transfer list as they consider him their most sellable asset. The Hornets value the Nigerian at £25 million and will listen to any offers they consider lucrative enough as they plot a rebuild for next season using the funds from the sale of the 24-year-old and a few others.

West Ham United, Arsenal and Leeds United have been linked to Dennis in the course of the season, and now Spanish LaLiga side Villarreal is reported to be preparing a £20 million bid to sign the striker.

The Spanish side will be uniting two Super Eagles stars at the Estadio De La Ceramica next season if Dennis chooses to move away from England, as he will be playing alongside Samuel Chukwueze.

Another Nigerian in a struggling Premier League side is Alexander Iwobi, whose Everton look set for relegation for the first time in the Premier League era.

The Toffees are one of six sides that have never been relegated since the new format was introduced more than three decades ago. But after terrible management on and off the pitch, they look set to fill in a negative entry into their history books.

They started the season with Rafa Benitez, whose experience was unable to get the team to play good football. Former Chelsea manager Frank Lampard joined the side in January and has also found it difficult to turn the team's fortunes around.

Iwobi, however, has been one of the bright sparks of Lampard's time at Everton so far but his performances have not been matched by the rest of the team, placing them in the position they currently occupy.

Former African Footballer of the Year, Victor Ikpeba, is hoping that Everton escape relegation for the sake of his compatriot. However, Ikpeba has admitted that it looks very bleak for the Merseysiders.

Speaking on a football show on local media, Ikpeba said: “Everton are one of the clubs that have never been relegated in the history of the Premier League, it is looking very dicey for Lampard and his boys.

“They had a good game against Liverpool, I think they deserved more.

“My worry is for the likes of Alex Iwobi, they have a lot of quality players.

“They spent a lot of money in the transfer window in the past five seasons and nothing to show for it, I hope they escape relegation.”