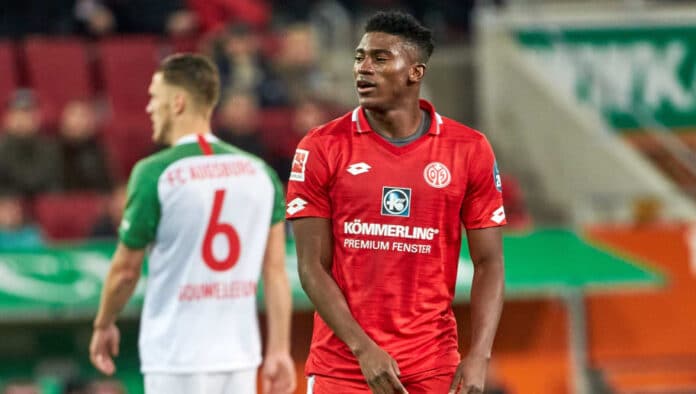 FSV Mainz sporting director, Christian Heidel, has expressed his frustration on missing the opportunity to sign Super Eagles striker, Taiwo Awoniyi after the 24-year old's two goals condemned Mainz to a first home loss of this season in the German top tier league.

Awoniyi who spent the 2019/2020 season on loan at Mainz, was returned to his parent club, Liverpool, after scoring once in twelve league matches for the 05ers.

Liverpool finally offloaded the former U-17 star last summer and it was Union Berlin who got the bargain.

Awoniyi has now scored five goals in seven league matches for his new side, Union Berlin, with Mainz, his former employers becoming his latest victims.

Heidel confessed that they were among those who negotiated with Liverpool to sign Awoniyi.

Still, they could not convince the Anfield giants to reduce the asking price for the former Gent man.

“I’ve always liked him, as you have seen, rightly,” Heidel said about Awoniyi, as per Rheinfalz.

“He was on the market, but we couldn’t finance the deal.

“We talked about him, but I didn’t get a discount.”

Union Berlin won the race for Awoniyi’s signature, completing a club-record €6.5 million deal for the Nigerian forward on July 20, 2021.

The former FSV Frankfurt loanee has been in spectacular form since, scoring eight goals and notching two assists in 12 matches across all competitions.