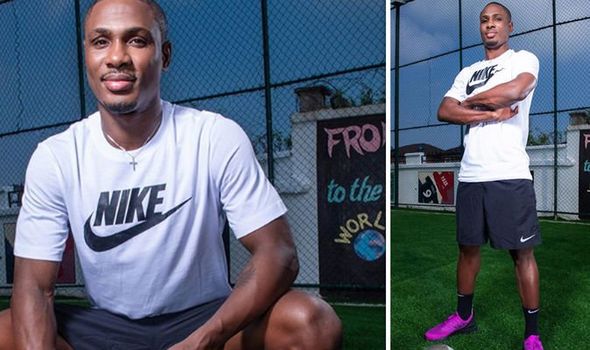 If you saw the 2019 Africa Cup of Nations held in Egypt, you couldn’t have missed the Nigerian who went home with the Golden Boot award. Yes, that striker is none other than Odion Ighalo.

Right after that feat, Ighalo retired from international football scene.

Born 16 June 1989, the top Nigerian star currently plays for the English Premier League (EPL) side, Manchester United, though on loan.

Where do I start from? Let me just start from somewhere.

Odion Ighalo’s biography shows that he too rose to become one of the brightest stars to come out of Africa.

It didn’t come to him on a platter of gold!

The peak of the Nigerian came a transfer news announced his loan move to Old Trafford in January 2020.

A move that was widely celebrated by Nigerians regardless of the bitter criticisms from football fans for his exploits on the pitch which many believe was not convincing enough for a player of his calibre.

Ighalo’s turning point came when Marcelo Houseman, a FIFA agent of Argentine origin saw his talent when he used to play in a local football pitch called Macarena in Ajegunle, where several top Nigerian football stars such as Kanu Nwankwo had played in, and took him to Norway where he was placed on trial.

I suspect this is where many keep referring to as Ighalo Football Academy. Well, it not. The striker doesn't have a know academy of his own.

So how old is Ighalo?

Looking at the year he was born, that puts him at 31 years. He’s obviously past his prime and getting set to wind down.

What tribe is Odion Ighalo?

I already told you where he was born?

Alright, Ighalo was born in Lagos but raised in Edo State, which is his State of origin.

He is a native of Esan. Mind you, he wasn’t the only one born on that day, his twin was too.

Is Odion Ighalo a twin?

I knew you were going to ask that question.

Yes, Ighalo has a twin sister named Akhere. It’s in the name.

If there’s an Odion, there’ll usually be an Akhere.

Oh, you won’t know that since you’re not from Edo.

However, her English name is Mary, and I must regretfully tell you that Mary has died recently.

All that was reported was that Akhere passed away at the age of 43 on December 12, after collapsing at her residence in Canada while preparing her children for school.

The ex-Nigeria international paid tribute to his late sister when he celebrated his first Manchester United goal playing against Emmanuel Dennis’ Club Brugge.

Ighalo told The Sun in an interview how much his sister loved United.

“My sister was a strong United fan. All of us grew up watching Manchester United, we all supported them.

“Mary's husband followed Chelsea, while their children were Manchester City and Liverpool fans, but she stayed loyal to United.

“She always prayed I would sign for United. Even when she came to watch me in the Premier League playing for Watford she hoped I would join United.

“The painful part for me is that I now have signed for United, but she is not here to see it. However, I know she is up there watching me.

“That is why I am going to play with her name on my boots, so she is always with me at Old Trafford or in any game for Manchester United.

“Every goal I score from now until I finish my career will be dedicated to God and to her.”

Were you crying? Well, enough of the tears.

Let’s look at other stuff about Ighalo.

How much does Ighalo earn at Manchester United?

The N1.4 billion seem much?

Let me shock you.

That figure is nothing compared to what he was earning while at Shanghai Shenhua.

How much does Odion Ighalo earn in China?

That Ighalo’s new wage I mentioned above is actually a pay cut when compared to the £300,000 salary in China (per week).

The sources also revealed that he will receive extra bonus money if Manchester United managed to qualify for the 2020/21 Champions League.

What Is Odion Ighalo Salary In Saudi Arabia?

And according to SalarySport.com, Ighalo earns £49,000 weekly wage in the Saudi Professional League side and an annual salary of £2,548,000.

With all of these earnings, how much is Ighalo net worth?

Odion Ighalo is one of the richest and most influential footballers in Nigeria with an estimated net worth of $30.7 million. In other words, Ighalo's net worth in Naira is somewhere around ₦12 billion.

He has an endorsement deal with Multichoice Nigeria and for (Nike) and wears the (Nike Mercurial Superfly VII Elite) boots in matches. No wonder he was named in the Sunday Times top 20 richest young stars.

So much for the money! Ighalo is a man and should be living with the opposite sex, right? So is Odion Ighalo married? Yes, let’s dig in.

Let me start by breaking your heart: Odion Ighalo, and his wife, Sonia, are separated.

What is out there in the grapevine is that the crisis in their 10-year-old marriage has been going on ever since Odion completed his multi-million naira building in Lagos which he has often visited without Sonia and their three children who are based in London.

Last year, they never posted any pictures of their family to celebrate Yuletide – as they used to.

Rather, the ex-Super Eagles star posted photos of himself alone to wish his fans a happy new year.

They also did not celebrate each other on their 10th wedding anniversary last year which was looked out for.

The Ighalos had unknowingly reacted to the trending rumours of their marriage dispute as they deleted each other’s pictures from their Instagram pages.

Their Instagram handles further shows that the striker and his wife, who are fond of praising each other on Instagram, have deleted all the posts that link them together, hence giving considerable room for the rumours.

I no longer consider what’s going between the duo a rumour, we are just waiting for the official announcement of either their divorce or reunion.

From the steps to the chandeliers and even the pool, Odion Ighalo’s new house as photographed by Kelechi Amadi-Obi of stylerave.com.

The house comes with its own gaming room, viewing room, fitness centre, and even a football pitch among other architectural delights that will definitely have you screaming.

The 29-year-old who also plays as a striker for Chinese club, Shanghai Greenland Shenhua, is proof that hard work pays.

But not only does Odion work hard, but he also plays hard and gives hard too.

If you're desirous for more, you can watch the video of Ighalo's new house below:

The father of three gives a portion of his salary to charitable organizations dedicated to helping impoverished children, widows and schools in Nigeria.

Having grown up in disadvantaged conditions himself, Odion founded the Ighalo Orphanage Home to help children in need of a home.

So much for that.

Now I want to list all Odion Ighalo current teams – and past – that he has played for.

The Manchester United loanee sure does have some awards he has won in his cabinet, for country, club and individual.

Let’s take a look at them.

Ending this Odion Ighalo biography article without showing you where to navigate to for all Odion Ighalo latest news won't be fair.