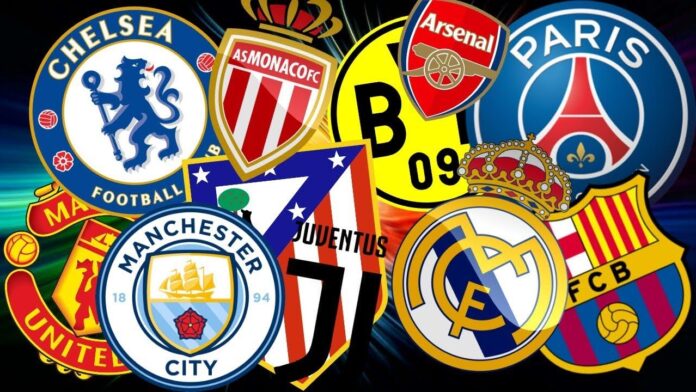 Which football clubs are with the most fans in Nigeria? There is quite a handful of them but I will limit this article to only the top 5 of them.

Even though these football clubs are domiciled in Europe especially, they expectedly have a large fan base in Nigeria.

Meanwhile, if you'd like to see a list of all the female football clubs in Nigeria, see them here.

Barcelona two decades ago would never have made the list of football teams with the highest fan base in Nigeria, but things turned around for the Spanish outfit when a young Lionel Messi came into the show in 2004.

However, as the saying goes, there is a thin line between love and hate, and the little magician began to win hearts with his drizzling skills, which translated to an increased fan base for the club.

As it stands, there are lots of Blaugrana fans in Nigerian, just as there are haters.

With Liverpool fans in Nigeria making a lot of noise after the club's UEFA champions league and EPL success, newbies to the football world may be tempted to think that these are all overnight supporters and Glory hunters but this isn't true.

If anything, Liverpool is one of the clubs with the oldest fans in Nigeria.

It is just that it can be really difficult to raise your head when your team has not won any significant trophy in the last 15 years and last won the EPL 29 years ago.

Now the club is doing great and is currently one of the best teams in the EPL right now, to the detriment of rival club fans.

SEE ALSO | Football Twitter: 10 Things You Should Know Before Joining

In the 2002/2003 season, Arsenal won the EPL title without losing any league match, establishing an invincible status.

This success got them so many fans in Nigeria, and to this day, they are the only team in the world to ever finish a league season without losing a single game.

However, after this feat, the club simply went on a steady decline and is no longer considered among title contenders in the Premier League.

Nevertheless, despite Arsenal's poor performance in the league, they have scavenged some significant trophies along the way, including the F.A Cup title.

Their Nigeria fans, who are known for their unshakable loyalty, will undoubtedly hope that the team gets restored to its previous height.

Many United fans will consider it unfair to be rated second in terms of fan base, which is why they are being rated as Joint top holders.

Manchester United is one of the two clubs with the loudest, largest, and most aggressive fans in Nigeria.

In fact, one out of three Nigerian football fans you meet probably supports United.

While Manchester United may not be enjoying their best times, the opposite has been the case with their Nigeria fan base, which seems to be increasing by the day.

The league's most successful club regularly acknowledges their fans, sending thank you message through their social media handle.

In England, the fiercest rivals with the highest fan base are Manchester United and Liverpool.

However, in Nigeria, Chelsea and Manchester United take the spot.

Chelsea, alongside Manchester United, has the biggest and loudest fans in Nigeria.

Both supporters usually have verbal clashes in viewing centres, including matches that neither team are playing.

If you live in Nigeria and you are a football lover, then you will notice that whenever Chelsea is playing, half of the audience are likely United fans, and this also goes for Manchester United.

Let's now take a look at the Nigeria Professional League Fans and see which one top my list of top five.

Top Five Nigeria Football League Clubs With The Most Fans

Rangers international football Club or Enugu Rangers is one of the oldest and most popular clubs in the Nigeria Professional Football League [NPFL].

Their rivalry with Enyimba Football Club makes both clubs a common name among supporters.

Enugu Rangers is one of the most successful clubs in Nigeria, winning 7 Nigeria Premier Leagues, 6 FA Cup, 1 SuperCup, and 1 Africa Cup Winners Cup.

Apart from the oriental club derby against Enyimba FC, Rangers fans are generally calm and business-minded and prefer to watch the team from range apart from some home games.

A typical Rangers' fan will love to watch matches against Northern teams and local neighbors.

Plateau United Football Club is one of Nigeria's most controversial clubs, and with these controversies have come both the good, bad and ugly.

For the good, their continuous ability to draw both the attention of FIFA and the NFF has led to more awareness which has led to increased fan support.

One of the most popular controversies was when the club's feeders' team won 79-0, attracting tons of widespread condemnation from both international and national bodies.

While the feeder's team players and all officials were banned for life, a lot of Nigerians, especially state indigenes, became aware of the senior team, with some pledging their loyalty.

The club won the NPFL in 2017, which was their first-ever championship win, but that still does not overshadow the club's crazy fans, which are just as controversial as their club.

The supporters of this team have been known to be a tad too aggressive with rival team players who come to their home ground.

They have a penchant for throwing targeted objects at rival players.

Fortunately, they try to keep it on a low, throwing local food items and not rocks.

Akwa United Football Club of Uyo is one of the most popular Nigerian football clubs in recent times.

Being in a country where supporters are apathetic towards the local league, Akwa United has been able to hold its own weight in terms of supporters.

Their turnaround in supporters was majorly due to their newly built stadium, the Godswill Akpabio International Stadium, which drew national acclaim due to its modern and standard facilities.

This turned a lot of attention to the team, with indigenes more willing to support the team.

Awka United fans, while they certainly do not watch all of their team games, know at least the present facts of their State Club and can proudly defend them when need be, and this includes using questionable claims and beauty of stadium.

Though how that relates to team performance is what they may have to tell the world.

When talking about Nigerian Clubs with the highest fans, Kano pillars definitely stand at the top of the list.

Almost every Kano indigene that understands the sport is a hard-core fan of the Pillars.

The history of the club is just as rich as that of the Nigeria football league, given that it was part of the first three clubs that formed the league in 1990.

The Club has some of the oldest Nigerian football supporters and has been able to register a couple of successes to reward their fans' loyalty.

With this Club, you will find football enthusiasts that can know all the history of the NPFL and are known to watch a lot of home games.

Nevertheless, the Club still has a lot of younger generation supporters who are just as loyal.

SEE ALSO | UEFA Coaching License In USA: How To Apply And Get It

The people's elephant is undoubtedly one of the best football clubs in Nigeria.

Enyimba, which is based in the city of aba, is state-owned and is considered one of the most successful clubs in the country.

The club has won two Africa champions titles, eight Nigeria championships, and four federations cup, with all coming from 2001, making it the most successful west Africa club since the last two decades.

All of this achievement has contributed to an increased fan base for the club since the turn of the 2000s.

Enyimba fans are generally passionate about their club matches and usually go wild when it comes to the Oriental derby, which features their team against the international rangers.

Being the Club with the largest fanbase in Nigeria, you will hardly find four supporters of the Nigeria football league without one of them being an Enyimba supporter.

If you want to improve this list of football clubs with the most fans in Nigeria, you can do so by adding any other team(s) you think deserve a mention.

Do you know who the highest paid player is in the Nigeria League? Find out here.