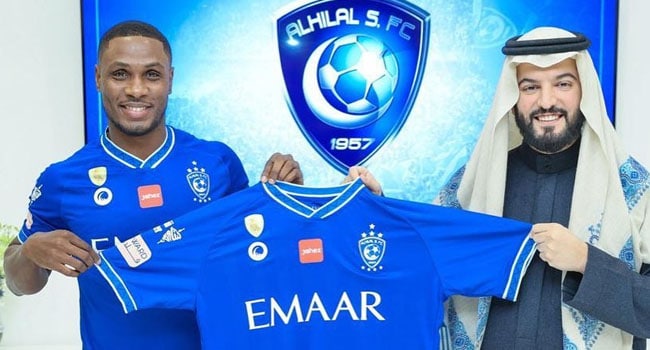 Saudi Arabia League are not much to talk about but has loads of cash. It is hard for semi-retired or retiring players to reject offers from the desert nation. Quite a few names have made their way to the country to earn some petro-dollars.

Some notable players to ply their trade in Saudi Arabia include Éver Banega, Bafetimbi Gomis and Vincent Aboubakar. It is not a league where players in their prime play. The Saudi Professional League is doing its best to lure talent in their prime to the country with oil lucre.

Saudi Professional League clubs are currently allowed to register up to seven overseas players to increase it to eight due to the dearth of local talent.

Recently, Odion Ighalo made the news after his club refused him to join the Super Eagles for the Africa Cup of Nations. Ighalo's name is making the rounds again after he moved to Al-Hilal.

The Saudi Professional League is not highly-rated across the globe. It is a narration that they want to change. It is hard to resist the kind of money being thrown around in Saudi Arabia, but top players in their prime would rather play in Europe.

Odion Ighalo has completed his move from Al Shabab to one of the country’s biggest clubs. The transfer has propelled the Nigerian international into one of the biggest stars in the Arabian top-flight. Al Hilal announced the transfer on their official Twitter account of his new club Al-Hilal. The club claimed to have completed the signing of the forward from fellow Pro League side Al Shabab.

Ighalo joined Al Shabab from Manchester United, where he saw limited game time under Ole Gunnar Solskjaer. He has been at Al Shabab since February 2021 after ending his loan spell with the Red Devils. Ighalo had a contract with Al-Hilal until June 30, 2023.

Looking to retain their title

The Blue Waves hope to retain the league title last year at the expense of Al Shabab, who they beat to second place. Al Shabab was looking to dethrone the champions but have lost a vital component of that title challenge to Al Hilal.

Ighalo is the current top scorer in the league, with 12 goals. He had hoped to pilot the White Lion to the title.

Al Hilal had seen their star man Bafétimbi Gomis depart the club and went for the best possible replacement from the league. Depriving rivals Al Hilal of their top hitman is a blow that will affect their title challenge. Al Hilal hopes that Ighalo can bang in the goals to move from fourth place to top of the league.

Ighalo has featured for several European clubs before joining Al Shabab. The Nigerian forward has seen his journey take him across European clubs like Lyn Oslo, Udinese, Granada, Watford and Manchester United.