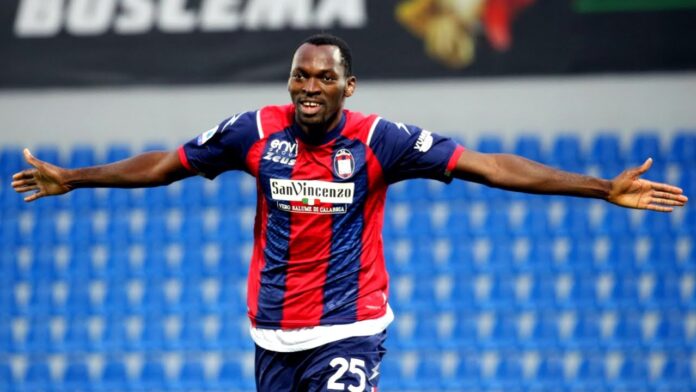 Nigerian striker Simy Nwankwo is looking for a new lease of life at Serie B side Parma. He found goals hard to come by at newly-promoted Salernitana.

The January transfer window shut down on Monday night amid some fascinating transfers. There were movements on the last day as clubs closed out deals to see them bolster their squad for the rest of the season.

Nigerian players were not active in the transfer window as their clubs chose to keep them in their ranks. With the season a little over halfway gone, the emphasis for clubs is known. The clubs in the quest for the title signed players to improve their squad, while others signed to replace injured or departing players.

Of course, clubs like Newcastle United in the Premier League want to avoid relegation and were perhaps  the busiest club this transfer window.

One Nigerian was in the news as he made a loan transfer. Simy Nwankwo, who has had a quiet season by his lofty standards, switched clubs in Serie A.

Simy off to Parma

The 2021/22 season has been quiet for Nigerian star Simy Nwankwo. The forward has had a torrid time in Serie A and yet to discover his form. The ex-Crotone striker has struggled this term to hit the heights that got the Serie A talking about him.

Speculations over the immediate future of the striker has been laid to rest after Parma completed a six-month loan deal for Simy with an option to buy. Simy joins Parma from Salernitana, where he has been on loan since the beginning of the season.

Parma currently lies in the bottom half of the Serie B table and was looking to improve their position on the log. Their quest led them to add strength to their firepower as they strive to climb up the table. Parma announced the deal for Simy on their social media pages and website. The Crusaders are trying to make a late push for promotion to Serie A.

What Parma are getting

Simy Nwankwo is a striker of repute. The forward has in his bag enough experience in Italian football. It is what the Crusaders are getting by signing Simy. In the 2019/2020 Serie B season, the Super Eagles striker was pivotal to the promotion charge of Crotone. He scored 20 league goals to help Crotone secure promotion to Serie A.

The performance of the Nigerian striker was seen as a one-off. Simy proved his doubters wrong as he repeated the trick in the Serie A. He scored 20 goals in Serie A to become Nigeria’s all-time top scorer in the elite division. Despite Simy’s goals, Crotone did not survive and were thus relegated back to Serie B. Simy was then sold to newly-promoted Salernitana.

Simy has found the going an arduous one with Salernitana. The gangling striker has found it challenging to replicate his form in the past two seasons for the Garnets. Simy has scored only one goal from 19 league appearances this season. The 29-year-old will now hope to rejuvenate his career at Parma.