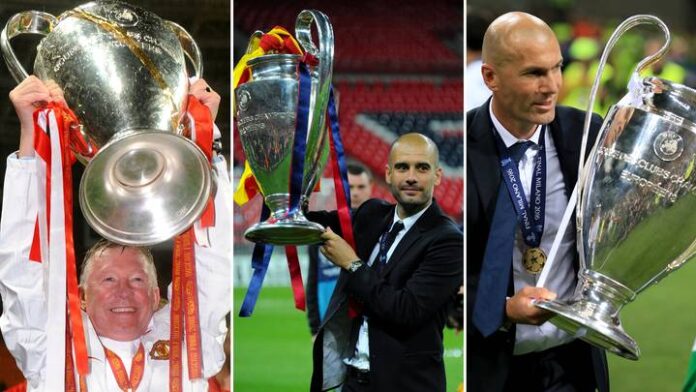 Can the top 10 Champions League managers really be decided by the number of trophies they have?

Of course, would being the most successful football manager be because you have the most UCL trophies?

I don’t think anyone will want to controvert that.

It’s simple arithmetic, I mean the number of games you win determine if you’ll lift the trophy or not.

Let's see who and who made the cut and got into my top 10 Champions League managers article.

Before I do that, you can download that wonderful UEFA Champions League theme song here.

He won the champions league with a very young side when just in his second season and did the same for Bayern three years later when he won the Champions League in 2001.

The two wins made him the first manager to win the UCL with two different clubs.

Benitez making this list is not in doubt after making fighters out of a broken team and in his first season guided them to the trophy in a fairy tale run that included a historic comeback against a star-studded Ac Milan when 3 nil down.

Appointed as a caretaker manager, Vicente Del Bosque did a great job of controlling the big egos in Madrid so well that he got the job.

His stay lasted for four years, and within that period, he made Madrid a formidable force as he led them to two champions league victory with the latter being the peak of the galacticos era.

If there were such a thing as a part-time Emperor of the Champions League… it is this man right here.

He comes and goes, but before he leaves, he lands a UCL parting gift or at least makes the semis.

He did this with Madrid in 1998 and repeated it 15 years later when he gave Bayern their first treble.

Beating Bayern with two quick-fire goals to complete a comeback in added time established Sir Fergie as a champions league icon, and he revived that status when he edged Chelsea to clinch the title again, completing a treble for that season.

With young homegrown players, Van Gaal trounced out European giants to win the champions league in 1995 and would have repeated the feat the following year but was denied by Juventus. A legend!

Mourinho proved games are won by defense when he shook the world by handing Porto the UCL in 2004 and repeated the same feat with inter Milan in 2010.

A UCL specialist, Carlo, is one of the two men on this list to have won the UCL thrice.

Twice with AC Milan and once with Real Madrid, with the latter a worthy win earned after the last man standing clash with Atletico Madrid.

Guardiola making second shows that it is not about how many you win but how well you win. With their Tika-Taka style of play, Guardiola Barcelona simply picked off teams on their way to both trophies, with Manchester United bearing the most brunt being their opponents on both finals.

If you think about the UCL emperor, he is the one. He has three UCL trophies. And he won them in a row. Undoubtedly, Zidane's first tenure as Madrid manager is a dream any manager on this list would have loved to be in.

That’s my list of the top 10 Champions League managers.

And by the way, Zidane’s second spell as the coach of Real Madrid has been nothing but fine so far. I’m even surprised he’s still at the helm of affairs at the Bernabéu.