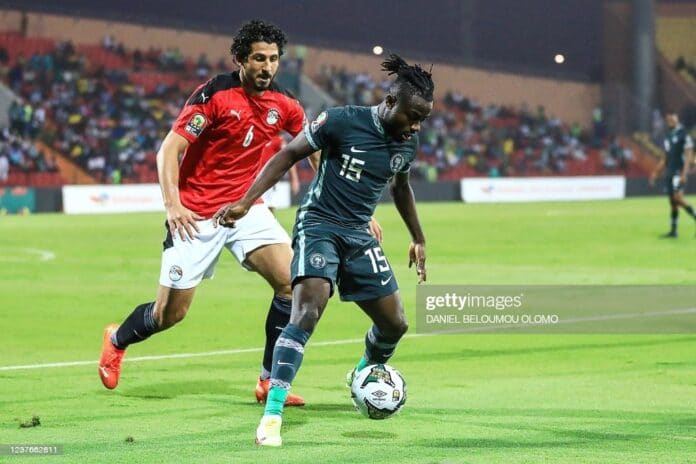 Moses Simon has emerged as a target for Newcastle United. The Nantes winger has a reported value of £20million.

The victory over Everton took them a point above Norwich City, who have played a game more and one point behind Everton. Things are falling in place for the wealthiest club in the world, and they can start planning for next season.

Ahead of the season, Newcastle are looking to acquire another player from the French Ligue 1. Super Eagles winger Moses Simon has caught the fancy of Eddie Howe after his grand performance at the Africa Cup of Nations in Cameroon.

Newcastle in the hunt for Simon

The PIF era at Newcastle is underway, and their first transfer window has been successful. Newcastle still have a few worries, but Eddie Howe is working assiduously to rein it in and keep the Toons in the Premier League.

The lack of firepower has been kind of bothersome for Howe, with Chris Wood yet to settle in at the club and Callum Wilson with an injury history that has kept him out of the side for periods.

Allan Saint-Maximin has been instrumental to the upswing of the club as he has produced goals and assists. Ryan Fraser, Jacob Murphy and Miguel Almiron lack end product putting to waste the efforts of Saint-Maximin.

Newcastle have switched their radar to the French Ligue 1, where Moses Simon is doing well. The Nantes winger brings something different and refreshing to the table. Simon had a splendid display at the Africa Cup of Nations, and he has scored two goals and produced six assists in 16 starts for Nantes in Ligue 1.

Reports suggest the former Genk forward would be available for around £20million, with Leeds United previously showing an interest in the winger. The figure is not inhibiting and well within what Newcastle can handle comfortably.

Moses Simon has a few drawbacks in his style of play, but his strengths could be of immense value to Newcastle. According to Goal, Simon is more a winger than an inside forward. Unlike an inside-forward, Simon rarely takes up goalscoring positions or creates chances, where he can take shots himself.

Simon is like Demarai Gray and Bukayo Saka, except the Everton and Arsenal stars are more productive in goalscoring. Despite his flaws, which can be corrected, Simon ranks among Europe’s leading 93% of wingers playing across the big five leagues over the past year.

Simon was described as “by far the best Nigerian player at the tournament” by Own Goal Nigeria. He is now being linked to Newcastle on the back of his performances.