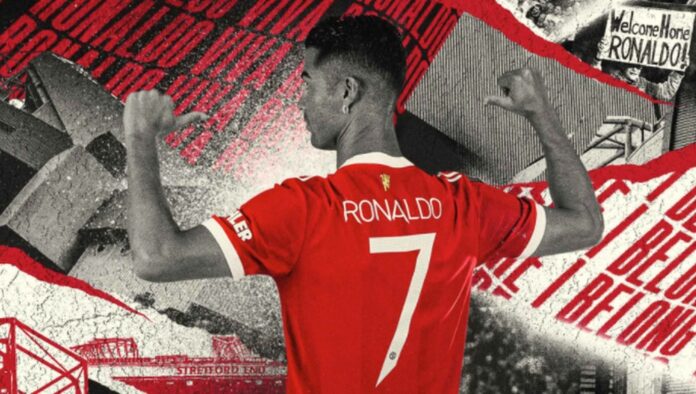 Manchester United's Cristiano Ronaldo has been handed the number 7 shirt at the club following his move back from Italian giants Juventus.

Before the arrival of Ronaldo, the shirt Number was held sway by Uruguay superstar Edinson Cavani who’ve joined the Red Devils side from French giants PSG.

But Cavani had to vacate the shirt to wear Number 21 in a scenario that had drawn the attention of many to the significance of the number 7 shirt to the Portuguese Talismanic Ronaldo.

Following this consideration, goalballlive.com evaluates the reasons as to why Cristiano Ronaldo wears the Number 7 shirt in every team.

The young Ronaldo whose move from Sporting Lisbon to Manchester United drew raptures interest was wearing the Number 28 shirt at the Portuguese outfit back home as at then.

But on arrival at Old Trafford, Sir Alex Ferguson encouraged the young lad (Ronaldo at that time) to take up the Number 7 shirt.

The former United boss saw that as a positive task ahead of his career since greats like David Beckham and Eric Cantona has worn and succeeded on the so-called Number 7 jersey for Manchester United.

It was never Ronaldo’s idea or make-up to wear the shirt, but Sir Alex motivation played a massive role here.

He believed that Ronaldo has got the quality to thrive on that shirt regardless of the expectations that lie ahead at the club and not even minding his huge transfer fee to Old Trafford.

The talented forward was akin to the Number 7 because primarily he was a winger accustomed during the 4-4-2 formation years.

Now football no longer employs more of this style with the invention of the inverted winger now in vogue where left-footed players are deployed on the right-winger as the case may be.

Ronaldo’s playing position could afford him the chance to wear the number 7 jersey playing from the right wings while he’s expected to provide crosses into the box for the centre forwards.

All these seem to have changed now though he still wears the number 7 shirt as he’s transformed himself into a goal-scoring machine.

That’s how good he was at Real Madrid and ex-side Juventus as he’s back to United reclaiming the same shirt Number 7 from star forward Edinson Cavani.

The fact that legendary players have worn this shirt has endorsed Ronaldo as one of the top candidates suitable for this stance.

He’s a legend already in the game after taking over from legendary Luis Figo in the Portugal national side.

On his arrival at Real Madrid, he had to wait for Real Madrid star Raul Gonzalez to make way before he took over the Number 7 shirt held formerly by the Spaniard.

He went on to surpass the record created by Raul. Portugal’s Ronaldo has gone on to eclipse him on the Madrid scorers chart while also earmarking his legendary significance as a player on the iconic Number 7 shirts.

The same thing happened when the Portuguese star came to the Serie A as Colombian winger Juan Cuadrado surrendered the Number 7 shirt for Ronaldo at Juventus.

He later picked up the Number 16 jersey at the club after (media) consultation from his followers on the social platform.