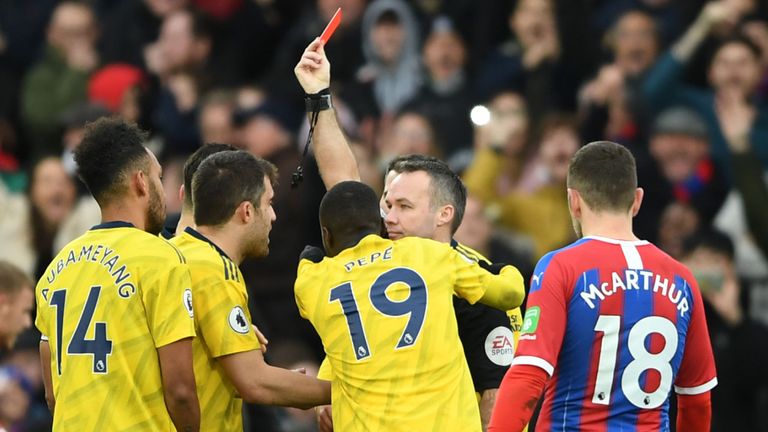 Referee Paul Tierney initially gave the 30-year-old a yellow card but it was changed to red following a VAR check.

In the wake of Auba’s red card, Gooners have flooded social media.

One wrote on Twitter: “Aubameyang sent off. Will miss the Chelsea game.”

Another wrote: “Can't argue with Auba red card but can argue the VAR consistency.

“If this was a red card, then those 2 challenges on Nicolas Pepe last month are also a red card.”

A third commented: “All day red that is, disgusting challenge by Auba, VAR did its work correctly there, however some of Palace players should be booked before that too.”

A fourth added: “Can’t argue with that, right decision to send Auba off.

“It wasn’t a malicious tackle but it was dangerous and could’ve seriously injured Meyer.

“Love the work rate from Aubameyang but it was a tackle he didn’t really need to make in that area of the pitch.”

Aubameyang had earlier given Arsenal the lead, with Jordan Ayew equalising in the second half.

His red card came in the 66th minute of the Premier League clash.

The Gabon International will now serve a three-match suspension.

It means he will miss Arsenal’s games against Sheffield United, Chelsea and Burnley.