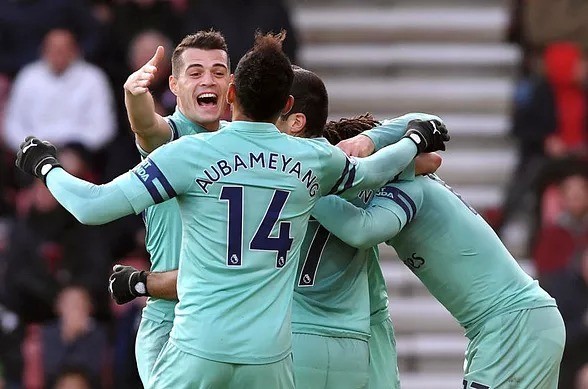 Arsenal are likely to welcome Pierre-Emerick Aubameyang back to the starting line-up for their Premier League clash with Bournemouth.

The Gabon striker is expected to return to the fold and provide support to Alexandre Lacazette, who scored the opener against the Terriers.

Henrikh Mkhitaryan is also expected to retain his spot in attack after bagging a goal and an assist, which means that Alex Iwobi could drop out after limping off against Huddersfield.

Matteo Guendouzi is pushing for a start in central midfield but Granit Xhaka and Lucas Torreira are Unai Emery's favoured pairing.

Arsenal deployed three at the back in their latest win, so Shkodran Mustafi, Sokratis Papastathopoulos and Laurent Koscielny will hope to feature again.

Sead Kolasinac will line up on the left flank and Ainsley Maitland-Niles is likely to return from illness to start on the right.

Stephan Lichtsteiner was forced off against Huddersfield with a back injury but could still be fit to feature.

The Gunners moved into the top four following the 0-0 draw between Manchester United and Liverpool and are three points clear of Chelsea in sixth.

Bournemouth are heading into the match on a three-game winless streak and have injury problems of their own with Lewis Cook, Simon Francis, Callum Wilson and David Brooks all sidelined.

Jefferson Lerma is also suspended so Arsenal will hope to make short work of Eddie Howe's under-strength side.