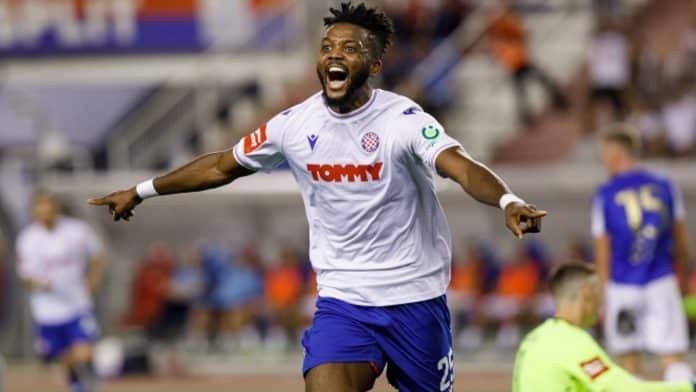 Super Eagles defenders Calvin Bassey and Chidozie Awaziem were on target for their respective sides at the weekend.

Bassey, who came under serious criticisms following Ajax's heavy defeat at home to Napoli in the UCL, scored his first Eredivisie goal for Ajax in their 4-2 victory at Volendam.

After that heavy defeat, it was redemption time for Bassey and De Godenzonen and they did just that at Volendam.

Alfred Schreuder and his Ajax team were focused on getting back to winning ways when they traveled to Volendam in their Eredivisie game.

De Godenzonen quickly exercised their authority immediately the game got underway, and it took them just 17 minutes to open the scoring.

Derry Murkin gave away a penalty for Volendam after he handled the ball in the area. Ajax skipper Dusan Tadic made no mistake from the spot, coolly converting his effort.

Ajax turned on the heat and in the 39th minute, they doubled their lead. Nigerian defender Bassey met a cross from Steven Berghuis with a powerful header to open his account for Dutch champions.

Brian Brobbey then made it three for Ajax in the 64th minute, before goals from Zeefuik and Eiting put Volendam witjn touching distance.

However, Davy Klaassen would go on to score a lovely strike in stoppage time and seal a 4-2 win for Ajax in the end.

Another game, another goal for Awaziem

In the Croatian HNL, Super Eagles defender Chidozie Awaziem scored the winning goal for the second consecutive game to power Hajduk Split to a dramatic 2-1 triumph over Varaždin at the Stadion Poljud.

The matchday 12 clash was heading for a draw after Varaždin’s Brodic cancelled out Sahiti’s 33rd-minute opener for the home side.

But Nigerian versatile player Awaziem was at the right place to turn home Marko Livaja’s cross for the winning goal nine minutes into stoppage time to secure victory.

Just recently, Awaziem was Hajduk Split’s hero last weekend when he netted the only goal in the defeat of Rijeka away from home.

After only eight league appearances in Croatia, Awaziem has scored three league goals – the most he has managed in a single season in his career.