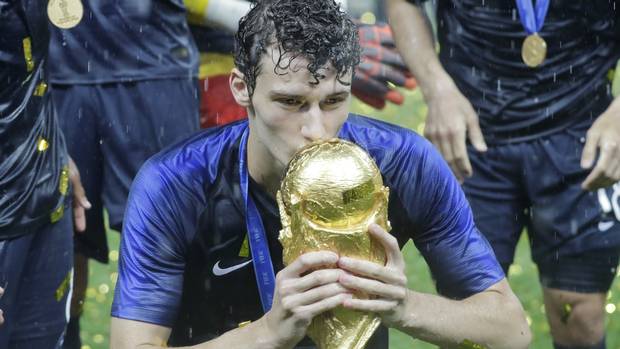 There were confirmations on Wednesday that Bayern Munich have agreed to sign Stuttgart defender Benjamin Pavard for a reported £31.4m fee on a five-year deal in the summer, and Arsenal fans quickly took to Twitter to react.

Pavard, who can play as a centre-back or a right-back, became famous during the Russia 2018 World Cup as he starred in the latter position for champions France, even scoring the goal of the tournament against Argentina in the round of 16.

The versatile 22-year-old had been impressing for Stuttgart both prior to the competition and again during the current campaign, and it is indeed no surprise that Bayern have moved to snap up top talent from a fellow German top-flight outfit – something that has become a common episode.

Meanwhile, the Gunners don’t look to have the greatest defensive options right now with big question marks over the likes of Shkodran Mustafi and Stephan Lichtsteiner – including captain Laurent Koscielny getting no younger – and the Frenchman for sure would have been a great option for little over £30m.

Arsenal fans went on Twitter to give their thoughts on the deal, and while one said “Pavard would have been a dream signing for Arsenal”, another said they “just wish Arsenal had signed him”.

Pavard is a great signing for Munich. Wouldn't have minded Arsenal going for him.

Benjamin Pavard would have been a dream signing for Arsenal, but I’m surprised it’s taken until now for a big club to snap him up. Brilliant player https://t.co/AwXAZeFnaj

€35 million Euros for Benjamin Pavard is a coup and a half in this current financial climate in football transfers, Bayern have got themselves a star, just wish Arsenal had signed him #Pavard #Bayern

35 mil euros for Pavard ffs. Would take him at Arsenal

So arsenal didn’t see pavard to sign all this time ??? https://t.co/erQYcjobYd