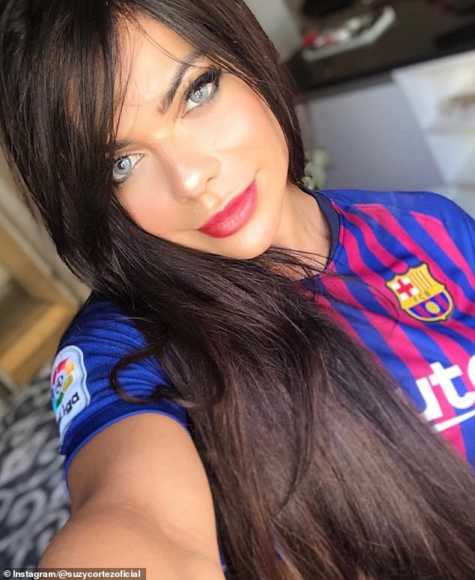 Fans of the 2015 Miss BumBum competition winner, Suzy Cortez, are being surprised with a video of the lady having Barcelona star Lionel Messi's name tattooed above her famous derriere.

The 5ft 7in model shared the video and pictures with her more than 1.5 million Instagram followers on Monday, despite the fact Messi and his wife have actually blocked her on social media due to her incessant messages.

The 28-year-old now has her favourite player's last name on her waistline right above her left buttock.

The tattoo also includes Barcelona's club shield and Messi's Jersey number, 10. One image shows her in front of a Christmas tree wearing Messi's jersey and showing off her buttocks.

The Brazilian model was recognized as Miss BumBum in 2015, a Brazilian beauty pageant that names the South American nation's best buttocks.

Cortez, who is a die-hard Barcelona supporter, is no stranger to controversy and caused havoc when she started flirting with Lionel Messi.

“I anticipated the celebration by having done a tattoo with the name of Messi and the number 10 together with the FC Barcelona shield to celebrate the 120 years, which I love so much.”

See all images and video here.