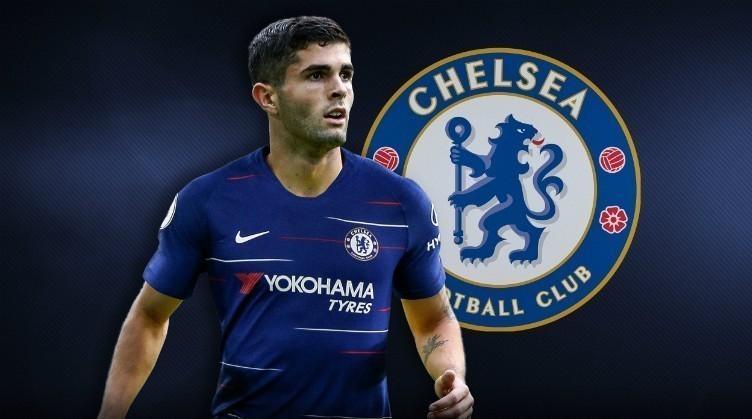 There’s a lot of excitement building for the arrival of Christian Pulisic at Chelsea this summer.

Supporters can now get Pulisic's name on their shirt once his number is officially confirmed.

So, what shirt number could the USA international wear at Chelsea in 2019/20?

Here Are The Shirt Numbers Currently Available To Pulisic

Danny Drinkwater looks set to exit the club in the summer after not featuring for the Blues since the Community Shield defeat against Man City in August.

Chelsea's No.9 shirt may also become available for Pulisic depending on what happens with Gonzalo Higuain in the coming weeks.

Every Chelsea fan is praying that Eden Hazard remains the club's No.10 once the summer transfer window slams shut.

Pedro's game time could be cut next season following the signing of Pulisic and Callum Hudson-Odoi's first-team breakthrough.

The No.14 is also now up for grabs with Tiemoue Bakayoko spending the season on loan at AC Milan.

Presently vacant following Victor Moses' loan move to Fenerbahce at the beginning of the year.

No.16 could be a possible option for Pulisic with Kenedy out on loan at Newcastle United once again.

Mateo Kovacic currently owns of the No.17 shirt but it remains to be seen if he will still be at Stamford Bridge next year following his loan move from Real Madrid.

The No.19 shirt is owned by Tammy Abraham but it is available with the youngster now spending the season with Championship side Aston Villa.

Michy Batshuayi's loan move to Crystal Palace means that the No.23 is available to any new signings who arrive at the club.

Although the No.25 jersey has not been officially retired by Chelsea it seems that the club do not want anyone to take on Gianfranco Zola's legendary number.

Just like the No.25 shirt, John Terry's No.26 could be left vacant following his trophy-laden spell at Stamford Bridge.

Alvaro Morata's squad number is also up for grabs as he departed to Spain in January after signing an 18-month loan deal with Atletico Madrid.

The No.32 shirt has not been in use following Marco Amelia's exit in 2016.

Ola Aina's loan spell with Serie A side Torino means his shirt No. is also free at present.

Amid doubts over Pedro's long-term future at Stamford Bridge, Willian may also be concerned about his game time at the club following the arrival of Pulisic.

Gary Cahill appears destined to end his long association with Chelsea in the summer with his contract set to run out.