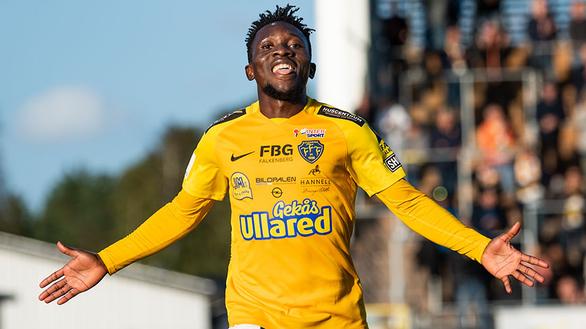 Chisom Egbuchulam has emerged as one of the top strikers in Sweden with his 15th league goal for second division side Falkenbergs in a 2-2 draw against Norrby which helped his side to move to within one point of leaders Helsingborg.

Egbuchulam put his side 2-1 up with his 15th league goal of the season in the 49th minute but it wasn’t enough to hand them all three points as Jasin khayat ensured Norrby share the points with a leveller in the 65th minute.

Signed on a short-term deal after failing to impress while on loan last season at top division side BK Hacken, the former Enugu Rangers forward has taken the second division by storm with 15 goals from 25 matches in the league and two in from the only Cup game he has played so far.

Egbuchulam leads the top scorers' chart in the second division, one goal more than Andri Bjarnason of league leaders Helsingborg.

Falkenbergs are already in talks with the Nigerian forward over extending his contract which is due to expire at the end of the current season in Sweden.