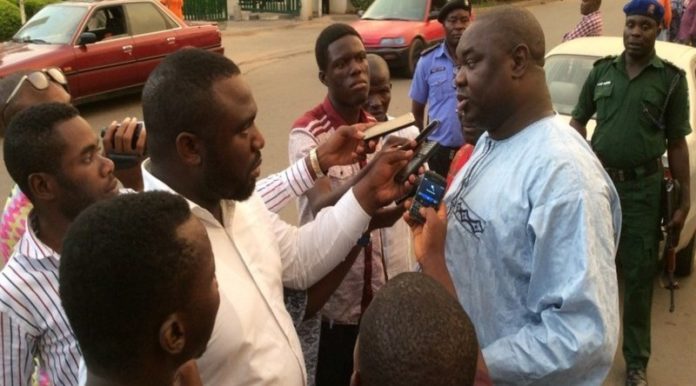 Chris Giwa factional board of the Nigeria Football Federation on Wednesday visited the NFF's Glass House secretariat in Wuse Zone 7, Abuja, with the intent of taking possession of the football house.

Sani Ferma, Dr Shehu Adamu and Yahaya Adama, who were elected at the disputed August 26, 2014, NFF Congress held at Chida Hotel in Abuja, took advantage of the withdrawal of the DSS operatives from the Glass House to attempt to take charge of the football secretariat.

According to the grapevine, the DSS who acted on the order of the Presidency on July 23, bundled out Giwa from the secretariat and then restored the Amaju Pinnick led board, to save Nigeria of an imminent FIFA ban.

Giwa, who is in a heated power struggle with Pinnick over the control of the NFF board, had before the DSS involvement, taken control of the NFF after a Federal High Court in Jos issued an order that recognised him as the properly elected NFF President.

At the recent NFF's Extra Ordinary General Assembly held in Bénin City, the NFF Congress opened a possible window for settlement of all aggrieved stakeholders in Nigerian football.

The Congress advised all aggrieved parties to within two weeks, ensure that they do away with all pending court cases against NFF and its leadership.