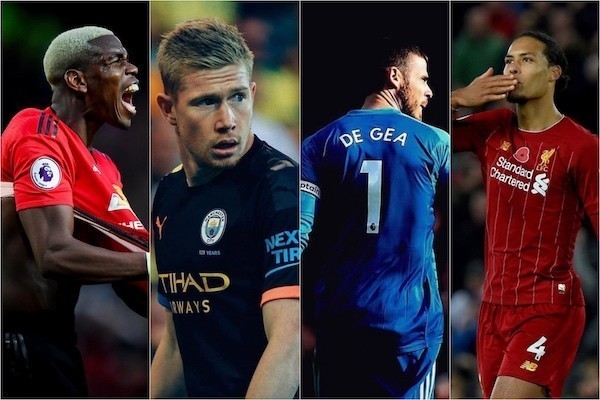 But who are the other highest paid players at Liverpool, Chelsea and Tottenham and the rest?

GoalBall has extracted a list of the highest earners at all 20 Premier League clubs, using data from spotrac.com.

Wolves desperate needed of tying their best players down, which is why they have offered six-figure deals to two of their biggest stars.

On those wages, the Ukranian winger back will need to improve his fitness to be considered a decent investment.

While Doucoure has consistent excellent performances to show for his high salary, Gray is yet to live up to his potential since a big-money move from Burnley.

It is no surprise Harry Kane is the highest earner at his club.

Norwich were unwilling to invest heavily in the squad, which is likely to see several of their best players push for a transfer this summer.

Shelvey was handed a new deal in November last year but has since been in and out of the first XI.

United’s goalkeeper tops the list of highest earning Premier League players, due to his being among the most recent ‘Big Six’ players to get a new deal.

The Belgian is the joint-third highest earner in the Premier League alongside Ozil, according to spotrac.com.

The Egyptian forward signed a five-year contract in July 2018 to make him the club’s highest paid player.

As a bonafide Leicester legend, it is no surprise Vardy is the club’s highest paid player.

Two recent signings, Bernard and Mina, are both on high wages but won’t be the biggest earners for much longer.

To ward off interest from top clubs, Zaha has been able to negotiate to become their highest earner.

The Frenchman’s latest contract, signed in 2018, was reportedly a record-breaking high, according to Goal.com.

Burnley gave the highest wages to one of their most loyal servants, a centre-back.

Jahanabakhsh has been a total flop, and as you would have thought their record signing is also their highest earner, alongside Gross and Montoya. The latter two have performed relatively well this season under Graham Potter.

The Villa captain’s latest deal, struck in July and worth six figures according to the Birmingham Mail, will be topped soon.

Ozil will enter the last year of his deal this summer, and on inflated wages is unlikely to be offered a new one.

Wilson was given a new deal in July 2019 by Bournemouth.