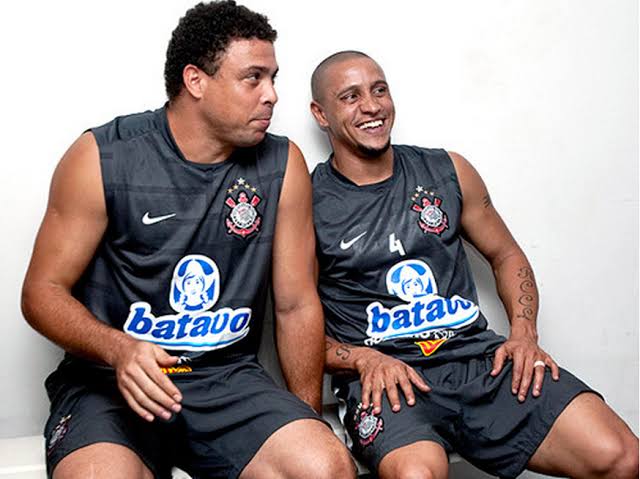 While revealing incredible behind the scenes stories of their Galáctico era, Real Madrid legend Roberto Carlos claims he slept with Ronaldo Nazario more than his wife.

The 46-year-old Carlos was part of the iconic squad with the likes of Ronaldo, Luis Figo, Zinedine Zidane and David Beckham among several of the biggest names in football at the time.

While the talk of player power has become relevant in modern football, the club legend explained how players already held more influence than managers in their era.

Speaking directly about Vanderlei Luxemburgo to Spanish website AS, the former Brazil left-back explained how the Florentino Perez appointment lost his job.

“In the second game of the league season we had the custom of leaving our bags in the hotel and going for a beer or a wine before dinner,” Carlos explained.

“There were always two bottles of wine on the table. Ronaldo and I told him: ‘Professor, people here have their habits, you’ll see what they are, but don’t try to change them.

“Don’t take the wine off the table or stop the beers before dinner or you’ll find yourself with a problem.” What did he do? First, he took away the wine, then he banned the beers. He lasted three months.

“Football is a small world, the directors heard about it and it was ‘adios.’”

When pressed on the difficulties managers faced during the Galáctico era, Carlos, who now works as a football ambassador for Real, recalled several notable moments.

“Today when I’m looking back I think; how is it possible that we got away with so much craziness? After every game it was private jets left, right and centre,” Carlos said.

“We’d meet up at the private terminal at Barajas and Beckham would be off God knows where, Figo and Zidane would be off somewhere or other, Ronaldo and me . . . and we always had to train the day after tomorrow.

“I used to pray for Saturday fixtures so I could go to the Formula 1 on Sunday. It was private jets all over the place. It was crazy.”

“Speaking about his former teammate and friend, with whom he lifted the World Cup in 2002, Carlos has nothing but fond memories.

“I met Ronaldo in 1993 and from that moment we always shared the room. I’ve slept more times with Ronaldo than my wife.”B-Metro