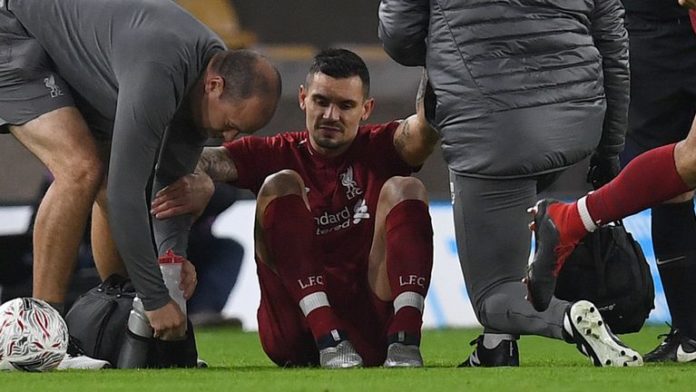 Dejan Lovren is now a muscle specialist in Croatia in an attempt to win the race to be fit for the huge Champions League clash between the Reds and Bayern Munich on Tuesday.

As per The Telegraph, instead of travelling to Marbella with the rest of the squad for a training camp, Lovren has returned to his homeland to visit a muscle-strengthening coach in an effort to play a part at Anfield.

Klopp has made it known that he is currently planning with the idea that Lovren will be unavailable for the clash and with Van Dijk suspended and Joe Gomez injured, either Fabinho or Jordan Henderson are expected to partner Joel Matip in defence.

“He is not here because he can’t be part of training.”, Klopp said in a press conference yesterday.

“We are back on Friday. From Saturday on, Dejan is back at Melwood and we will see.

“But, of course, we have to prepare it differently. If Dejan gives a sign on Monday and says, ‘I feel brilliant’, then we’d have to think anew.

“I don’t want to rule it out but I cannot really plan with it.

“At the moment, we prepare the game and in this preparation, Dejan is not involved. We have to find other solutions.”

Lovren has not been able to feature since the 2-1 defeat to Man City at the beginning of January, with a damaged hamstring causing him to miss the past 5 weeks of action.

The centre-back crisis is the major concern facing Liverpool before Bayern come to Anfield and Robert Lewandowski is certain to prove a handful.