Dr Ifeanyi Okowa yesterday, redeemed his pledge of $25, 000 dollars per goal scored by the Super Eagles in their African Cup of Nations qualifying match against South Africa.

At a state banquet yesterday held in honour of the Super Eagles at Government House, Asaba, the Delta State Governor disclosed that though, the match ended 1-1, he saw the Super Eagles scoring more than one goal.

According to him, “We are very happy that you left for South Africa from Asaba because you enabled us to witness the first international flight from the Asaba International Airport; I am truly excited this evening that we are hosting our dear Super Eagles as a state government and the Ugandan Team that earlier played with the Super Eagles at the Stephen Keshi Stadium, we truly enjoyed ourselves because the two teams played good football.”

President of NFF, Mr Amaju Pinnick had in his speech, thanked Governor Okowa for his support to the Super Eagles, stating that the team had qualified for the 2019 edition of AFCON. 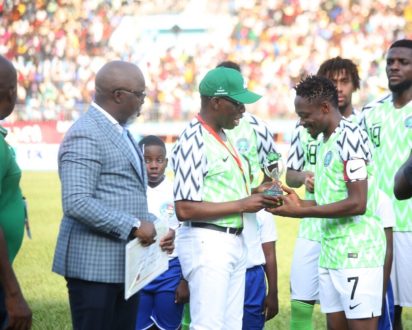 “We should thank Governor Okowa for not just chesting out for NFF but, giving us everything we need to qualify for AFCON, I am a very proud Deltan; we have come to Delta, we have seen and we can testify that things are okay; Your Excellency, we want to thank you; in March 2019, the Super Eagles will come back to Delta State to play with another international team, please, continue to support the Super Eagles.”

The governor, in turn, presented the money he promised the team for every goal scored to the Captain of the Super Eagles, Ahmed Musa.