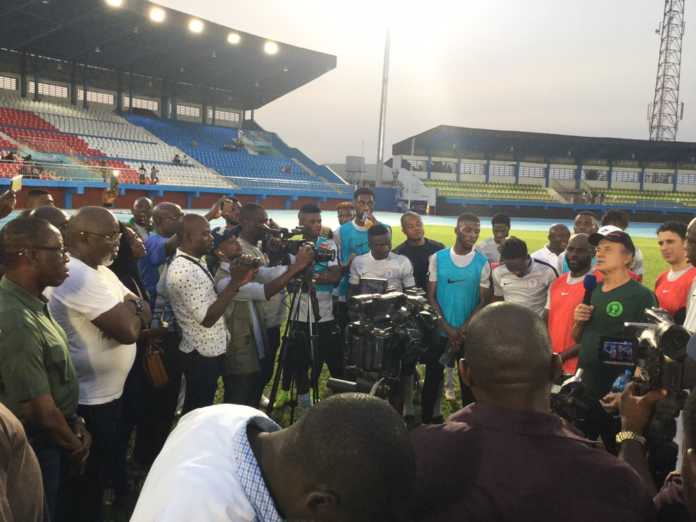 Delta State Governor, Ifeanyi Okowa has decided to back the Super Eagles dream of avenging the 2-0 defeat South Africa inflicted on Nigeria at the beginning of the 2019 Africa Cup of Nations qualifiers.

Okowa yesterday promised to reward Eagles with $25,000 for each goal scored against Bafana Bafana at the FNB Stadium in Johannesburg on Saturday.

The Governor who is hosting Super Eagles' camp in Asaba ahead of the trip to South Africa, promised the team the incentive when he breezed into the Stephen Keshi Stadium to felicitate with the players during their evening training session.

President of the Nigeria Football Federation, Amaju Pinnick had thanked the governor for making the Stephen Keshi Stadium available for the Super Eagles to train, describing the team as the “Most disciplined, young and promising who are in the home of sports, Delta State.”

Super Eagles Technical Adviser, Gernot Rohr, described the pitch as one of the best in the country while team's stand-in Captain, Ahmed Musa, assured the Governor that Nigeria would go to South Africa and qualify for AFCON 2019.

Musa and 21 other players trained at the Stephen Keshi Stadium yesterday evening as the Eagles stepped into gear for the battle against the South Africans.

The Bafana Bafana had in June last year inflicted a 2-0 defeat on Nigeria in the first match of the 2019 Africa Cup of Nations qualifier in Uyo.