The third Africa Cup of Nations quarterfinal sees Egypt and Morocco serve up another heavyweight meeting and we will be building up to the clash in this Egypt vs Morocco prediction post.

Our Top Egypt vs Morocco prediction

There is little to choose between the teams as they both boast quality players and this game could swing either way. However, Morocco have been more convincing over the course of the entire tournament and we back them to secure progress into the next round.

It is an all North African affair at the Stade Ahmadou Ahidjo in Yaounde on Sunday as rivals Egypt and Morocco lock horns. 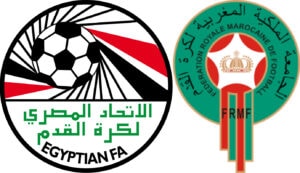 Egypt needed penalties to see off the threat of Ivory Coast when the teams faced off at the Japoma Stadium on Wednesday.

After a goalless 120 minutes in Douala, the game was to be decided from 12 yards and the Pharaohs emerged victorious with Mohamed Salah converting the all-important spot kick to send Carlos Queiroz’s men through.

The AFCON record winners march on at this year’s edition as they go in search of their first continental crown since going all the way in 2010.

Sunday’s game is arguably their biggest challenge of the tournament and the Egyptians will need to be on song to book a semi-final meeting with one of Gambia or host nation Cameroon.

Veteran goalkeeper Mohamed El Shenawy was subbed off late in the game versus Ivory Coast and is a huge doubt for this one.

Thirty-two-year-old Gabaski, who came on for El Shenawy in the aforementioned game, made a crucial save in the shootout and could retain his place between the sticks.

Morocco were handed a favourable round-of-16 tie versus Malawi but had to work hard to secure a 2-1 victory at the Stade Ahmadou Ahidjo on Tuesday.

With a host of well-established players at their disposal, the Atlas Lions have established themselves as one of the favourites to claim the AFCON title which they last won 46 years ago in Ethiopia.

Their last appearance in the last four of the competition came back in 2004 when they eventually went on to lose to Tunisia in the grand finale.

Achraf Hakimi has been a formidable goal threat for his nation in recent matches and the PSG wing back is one to keep an eye on.

Having opened his account for the tournament last time out, Youssef En Nesyri heads into this weekend’s game with the wind in his sails.

The Egypt vs Morocco odds for all possible match outcomes are as follows:

*Odds from Melbet, correct as at the time of publishing.

Morocco have dominated this fixture to a large degree, winning just under half of the all the previous encounters between the sides in history.