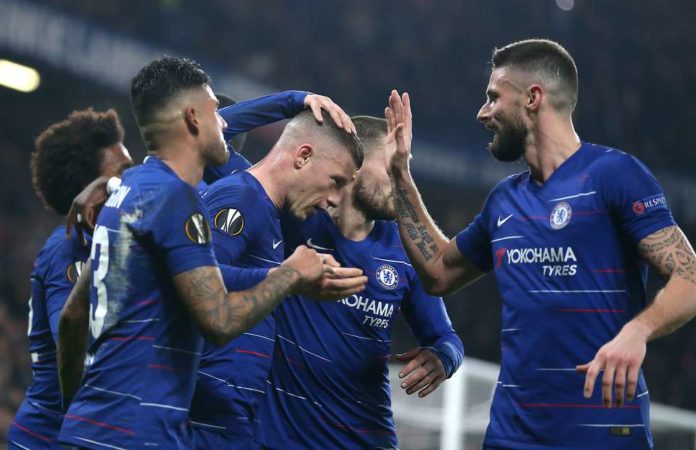 Chelsea will most likely be making several changes to their starting XI when they take on Everton today.

The Blues return to action on the back of a thumping win over Dynamo Kiev in midweek which secured their Europa League quarter-final spot.

SEE ALSO: Kepa Arrizabalaga Is Still My Number One Despite Tottenham Demotion – Sarri

Olivier Giroud’s hat-trick in the 5-0 victory and will be enough to earn him his seventh Premier League start of the season against the Toffees.

Gonzalo Higuain missed the trip to Ukraine due to illness and is expected to be in contention this weekend, although Maurizio Sarri may stick with the in-form Giroud up front.

Eden Hazard started on the bench against Dynamo and should get the nod this weekend, as will Jorginho, David Luiz and Cesar Azpilicueta.

Callum Hudson-Odoi, Ruben Loftus-Cheek, Andreas Christensen and Davide Zappacosta are most likely to drop to the bench in their place.

Willian and Mateo Kovacic started in midweek and could also drop out at the expense of Pedro and Ross Barkley if Sarri opts to freshen up his side.

Victory over Everton would move Sarri's men level on points with Arsenal in fourth as the Gunners are without a match this weekend due to FA Cup fixtures.

The past two league meetings between Everton and Chelsea have ended in 0-0 draws so something special will be needed to break the deadlock.