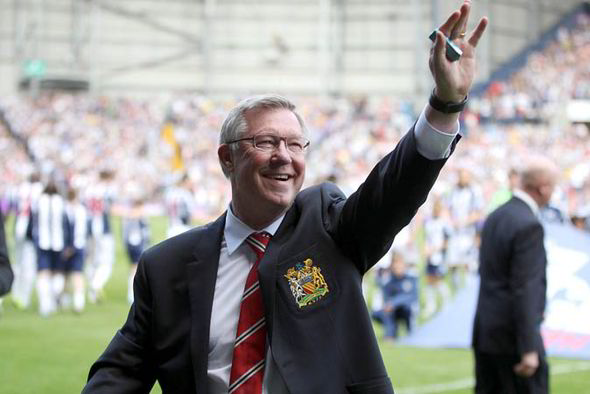 Sir Alex Ferguson would for the first time since his surgery be watching his former side play against Wolverhampton Wanderers at the Old Trafford today. His return was met with the warm welcome of many stars and fans. United sit eighth in the Premier League standings while the Wolves are just a spot behind them. A great and exciting game would surely ensue between both sides.

In early May this year, the former United coach received emergency surgery after he suffered a brain hemorrhage. Many had prayed for his health. Fast forward to four months later, Ferguson made a public appearance at Old Trafford to witness Jose Mourinho's side play.

The former the Red Devils is one of the most highly regarded managers in the world. He led the club to great heights and glory. Before falling ill, the 76-year-old last appeared at Old Trafford alongside former Arsenal manager, Arsene Wenger. Both managers had met on multiple occasions as the managers of their respective clubs. However, the two distinguished men have since left their positions as the Premier League club managers.

Upon his return to the Theatre of Dreams, Sir Ferguson will be honored by the club. Manchester United has urged their fans to be seated early in order for the ceremony to start on time. Many former players and fans are simply thrilled to see the former Scottish footballer back at the stadium and looking fully recovered from his illness. See some reactions from Twitter to the news.

Delighted to see Sir Alex Ferguson looking well and smiling at Old Trafford today. So good to see the Boss back after a hard few months. pic.twitter.com/qsnkO1oUiq

Sir Alex Ferguson is back at Old Trafford for the first time since his emergency brain surgery in May ? pic.twitter.com/1XWoSd7tEs

Absolutely AMAZING to see all the love shown towards Sir Alex Ferguson on my TL today!! Just goes to show what an impact he has made & how much the guy is respected by all united supporters.. massive LOVE!! @ManUtd ?❤️❤️??

Sir Alex Ferguson: “I am really good, obviously it has been a long journey. Yeah, I’m really good. Well, I’m a bit nervous to be honest with you, a bit tense, my last game was Arsenal back in April. It’s a long time, but it’s great to be back and I hope we get a win today.” #MUFC

On my way to the theatre of dreams to see my heroes and another one will be there today. SIR ALEX FERGUSON welcome back Boss

Every single one of us,

Every single one of us,

So Many Years the boss and we adore him

Simply The Best, United through and through

Forever we will be his Red Army… ! ?❤️ #RedArmy #MUFC pic.twitter.com/HTAF1xTbo7

Sorry Wolves but its game over..#MUFC

The boss in Sir Alex Ferguson returns to Old Trafford today, really hope we can entertain and satisfy him with a dominant performance and victory. He deserves that at least.

Absolutely love when players and ex-players still refer to Fergie as ‘boss'. Shows the impact he's had on them both on and off the pitch. Every single one of us loves Sir Alex Ferguson.

The boss Sir Alex Ferguson is back for Uniteds match against Wolves where we will battle to a narrow 1-0 win ?

Sam Allardyce said Sir Alex Ferguson was targeting a Christmas or New Year game to attend. He really is the master of comebacks #mufc https://t.co/TShARUDgtk

Sir Alex back where he belongs, as close to a football pitch as possible ? https://t.co/jNzROdfiyU

I love Sir Alex Ferguson. So glad that he's fully recovered and will be in attendance for the Wolves encounter.

Take a bow the greatest. #MUNWOL