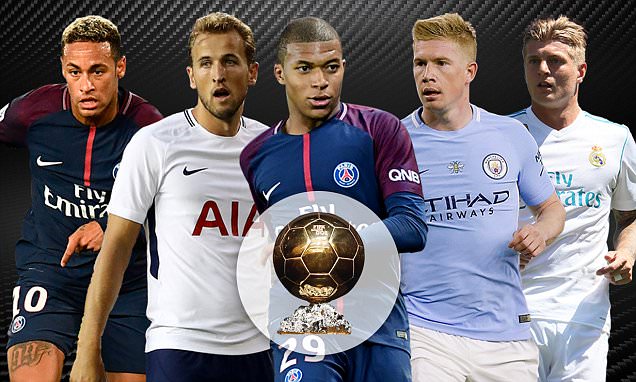 For the past decade, the Ballon d'Or has been passed between two men for an astonishing 10 times between them: Cristiano Ronaldo and Lionel Messi.

Thus, we are going to look at eight other big soccer names who could sneak their way into Ballon dOr 2018 Nominees list.

But with Messi and Ronaldo both now over 30 (rule them out at your peril), could 2018 Ballon d'Or be the year that it will finally be won by a new name?

Here are the top 10 names that could sneak into the Ballon d'Or 2018 Nominees list:

We have intentionally left out Cristiano Ronaldo and Lionel Messi from this Ballon d'Or 2018 list.

Neymar has been there before with Messi and Ronaldo on two occasions in the past three years. Almost certainly the most likely to dethrone the pair.

One of Neymar's biggest rivals for the Ballon d'Or 2018 winner title is his 19 years old club team-mate Kylian Mbappe.

If Mbappe does win the 2018 Ballon d'Or, he would be the youngest ever player to do so.

Harry Kane has had a great career in front of the goal.

Also in contention of knocking Ronaldo and Messi off the title is the 2014-15 PFA Player of the Year.

Eden Hazard has been a stand-out for both Belgium and his club in recent years, with some of the major clubs around Europe interested in signing him, including Real Madrid.

Eden Hazard will have to have the best few months of his career so as to force his way into Ballon d'Or contention.

So far we have only seen a peek of what Pogba is capable of, but he has the ability in abundance and is gifted with controlling games.

Pogba has been to help France win the 2018 World Cup, so he too can add his name to the list of Ballon d'Or winners.

Griezmann got the position in the 2016 Ballon d'Or behind Messi and Ronaldo and as a World Cup winner, he could make it too, just like Pogba.

In a team full of attacking talent, Toni Kroos gently goes about his business in a star-studded Real Madrid team. Madrid, however, owe a lot of their current success to Kroos’ job in the midfield.

The final name on the list is Messi's national team-mate Paulo Dybala. The Argentine finished 15th in this year's Ballon d'Or and at 24 he's finally coming of age.

Dybala's capabilities are no secret and if Juventus can get a good run in Europe again, then he may possibly stamp a claim for becoming the winner of the Ballon d'Or.

Nigeria's Emmanuel Ammunike, who is currently in the head coach of the TAIFA Stars of Tanzania, has been invited by FIFA for this year's prestigious award.

“Yes, I was invited by FIFA to come and witness the unveiling of modern trends of the game such as the VAR that was put to use at the recently concluded Russia 2018 World Cup,” Coach Emmanuel Amuneke said.

The meeting is expected to take place on September 23rd, 2018 [a day before the Ballon d'Or 2018 award date] and it would have in attendance the FIFA President, the Russia 2018 World Cup Technical Study Group and all National Team Coaches under FIFA.

“I am honoured and also privileged to be invited yet again as part of the technical study group to share my ideas of the World Cup with all the national team coaches and also to be part of the FIFA balloon D’or that is going to take place in London,” TAIFA Stars Boss concluded.