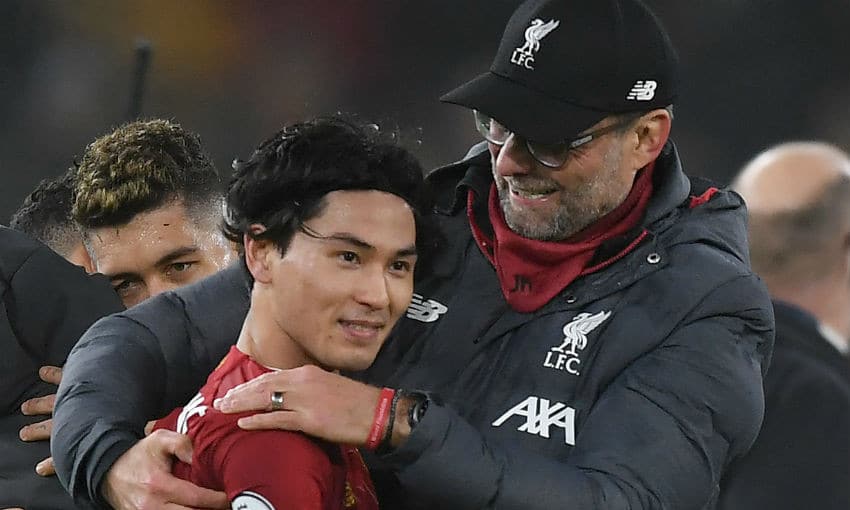 Takumi Minamino’s start to life as a Liverpool player has won him plenty of admirers – and none more so than Jurgen Klopp, who listed four details of his performance at Wolves that delighted him.

The Japan international, a £7.25million arrival from Red Bull Salzburg, is in line to play in the FA Cup fourth-round tie at League One Shrewsbury on Sunday, having made his debut in the previous round against Everton.

A minor complication was introduced to Klopp’s plan when the 25-year-old had to come off the bench to play nearly an hour in the 2-1 win over Wolves after an injury to Sadio Mane.

Making his Premier League debut was a “big step”, according to Klopp, and he has to decide how much that took out of the player.

“We have to think about what we do because he played much longer than we thought,” said the Reds boss.

“Thursday night was a big step for him. For nobody was it a game where you shine and play your best game ever.”

Klopp then hailed the four things Minamino did so well when stepping off the bench in a difficult evening against Wolves.

“When you come in as a new player in this kind of battle, showing up like he did, not with his skills but with his mentality and character, fighting like crazy, closing gaps, it was a super start.

“He’s pretty versatile and he did exactly what he had to do. I have to see how he reacted to the intensity to that game.

“I don’t know him long enough in that regard, but each game helps.”

Minamino‘s only other previous involvement was 70 minutes against Everton when he did not really get a chance to settle in, having only arrived at the club five days earlier.

However, Klopp is happy with how his integration is going.

“He’s a super boy – exactly the player we expected,” he added.

“You saw so much of his ability (against Wolves). As a footballer, you can’t only play on the days when everything is clicking, scoring two goals, all that stuff.

“This game was a proper fight and he was completely ready for that. A new team, adapting, and from a tactical point, it was an outstanding game.

“In training, we see the finishing and the creating. He’s the player we wanted and now he’s ours.”

Klopp will rest most of his first-team stars for the trip to Shrewsbury but will still be able to field a much stronger lineup than he did when the squad was affected by injuries for the last round.

Centre-backs Dejan Lovren and Joel Matip, back from lengthy injury absences, are likely to start, as is striker Divock Origi, probably Adam Lallana, providing he recovers from the illness which forced him to miss the Wolves game, and possibly Fabinho as he makes a gradual comeback from an ankle injury.

“It’s a chance for a lot of players. I didn’t make the line-up yet. We have to wait for all the medical reports,” said Klopp.

Liverpool, meanwhile, are reported to be readying a huge bid for a Napoli star after seeing efforts to persuade Real Madrid to cash-in on a playmaker fail.