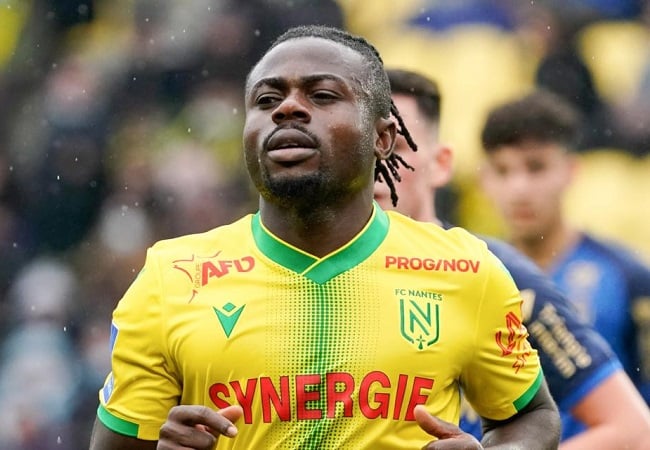 Super Eagles winger, Moses Simon, will hope to score his 25th for Nantes when they file out in the Europa League on Thursday.

Simon, who is in line to make his 11th appearance in the competition, will look to help Nantes end their seven-match away winless streak (W0 D2 L5) against Freiburg, who will be aiming to maintain top of Group G.

The Nigerian forward who has an eight-year goal drought in the competition, will be hoping for a change in fortune in the encounter.

The 25-year-old’s only goal in the Europa League came in Gent’s 5-2 loss against Shaktar Donetsk in a Group H encounter on March 11, 2016.

Having finished ninth last season, Les Canaries have found things much tougher this season, only picking up seven points from their first nine league games to sit in 16th position in Ligue 1.

Their 4-1 defeat to Monaco last Sunday extended their winless run in France to five matches, while their 3-0 defeat in Azerbaijan last time out in the Europa League has left them behind Qarabag on goals difference in Group G.

As such, Antoine Kombouare’s side could definitely do with gaining a positive result in Freiburg on Thursday, although they would still have more than enough time to rectify the situation should they fall to a defeat to their in-form opponents.

Nantes are playing in any European competition for the first time in more than 20 years due to their Coupe de France win for only the fourth time in their history last season.

Meanwhile, Freiburg have continued to punch above their weight under the tutelage of Christian Streich, who has been in charge of the club since 2011, after finishing sixth and reaching the DFB-Pokal final for the first time in their history last season.

Breisgau-Brasilianer are embarking on their second Europa League group-stage appearance under Streich, and have won both matches so far to sit three points clear at the top of Group G ahead of Thursday’s visit of Nantes to Europa-Park Stadion.

Meanwhile, according to Tribune Nantias, Nantes have began talks with the representatives of Simon to sign a contract extention beyond 2024. Simon made 30 Ligue 1 appearances last season, scoring six goals with eight assists.