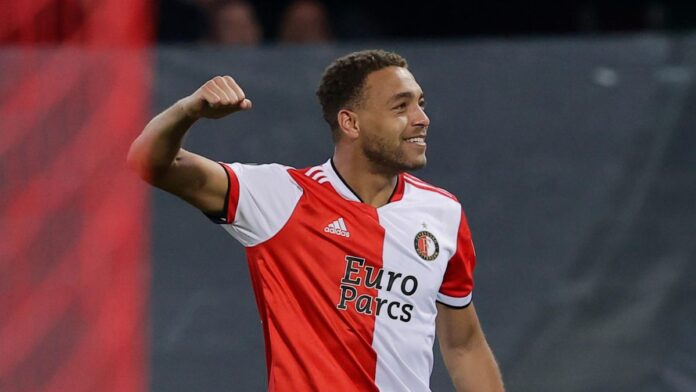 It was another solid outing for Nigerians in European competitions on Thursday afternoon.

Dessers and Feyenoord Rotterdam have made history by sealing a place in the final of the maiden edition of the UEFA European Conference League.

While Feyenoord are no strangers to European competition, they have been away from the grand stages for a number of years. The Conference League was their way back in and they have grabbed the opportunity with both hands.

Dessers has been the driving force behind this European renaissance for the Pride of the South, scoring 10 goals on their road to the final. The striker, on loan from Belgian club KRC Genk, is the leading goalscorer in the competition and could further extend his goal record as Feyenoord have scaled past the hurdle of Olympique de Marseille to the final.

Feyenoord won the first leg of their semi-final tie 3-2 at De Kuip courtesy of a Dessers brace which fought off Marseille's attempts at a comeback. They travelled to France and were defensively solid to come away with a 0-0 draw and the ticket to their first European final in 20 years.

They will face Jose Mourinho's AS Roma on May 25, 2022, for the bragging rights of the first ever winner of the Conference League. The winner of that final will move up to the Europa League next season, an opportunity Feyenoord will be relishing ahead of the final later this month.

Dessers' Super Eagles teammates Kelechi Iheanacho and Ademola Lookman were not as lucky as Roma beat them by a lone goal in the second leg of their semi-final tie in the Conference League to win the tie 2-1 on aggregate.

The tie breaker was scored by Nigerian Englishman Tammy Abraham to send Roma to their first final in 31 years. Meanwhile, Leicester City will be missing out on Europe next season as they are on the wrong end of the table.

Glasgow Rangers will be appearing in their first European final in 14 years after coolly dispatching German club Red Bull Leipzig 3-1 at the Ibrox.

The Germans came into the tie with a 1-0 lead from their home stadium but Rangers proved too much for them in Scotland, beating them 3-1 to end the tie 3-2 on aggregate.

Aribo ended the night with an injury after taking the full force of a free kick to his face, but ended the night as a finalist with his Nigerian teammates Calvin Bassey and Leon Balogun. Bassey played the full game while Balogun was introduced after Rangers' had gone ahead on aggregate to strengthen the defence.

Aribo will hope to be fit enough to travel with Bassey, Balogun and the rest of his Rangers teammates to Seville to take on Frankfurt on May 18, 2022 for a chance at the biggest trophy of their careers.

December 22, 2022
May 6, 2022
Home Leagues and Cups Nigerians in Europe: Leicester fall to Roma; Rangers and Feyenoord progress to...