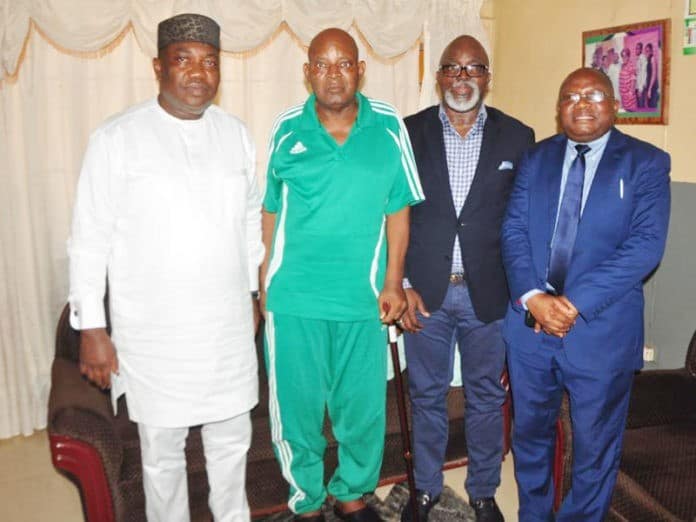 Ex-Green Eagles captain, Christian Chukwu has received the money promised him by billionaire oil magnate, Femi Otedola to enable him to proceed to the UK in early May for treatment of the prostate cancer he has been battling for some time now.

According to THISDAY, the COO of Otedola Foundation, Phillip Akintola represented the chairman of Zenon Petroleum and Gas Ltd at the cheque presentation to Chukwu.

He was accompanied to Chukwu’s home by Enugu State Governor, Ifeanyi Ugwuanyi, President of the Nigeria Football Federation (NFF) and others.

“Otedola’s decision to extend his hand of fellowship to Chukwu is a “token of support to a great Nigerian who served this country to the best of his ability,” THISDAY was informed by a top football personality in Enugu last night.

In a similar development, Gov Ugwuanyi has directed the immediate employment of Emeka Chukwu, the first son of the ailing Chukwu into the state’s civil service fold.

On his part, Pinnick said that the NFF would approve an appointment for the former skipper of the Green Eagles as a Life Ambassador of the organisation.

He said that the management of the NFF would work out a stipend that would be paid to him.

Responding, the son of the former coach, Emeka Chukwu, thanked the donor and the NFF for their interests in his father’s illness.