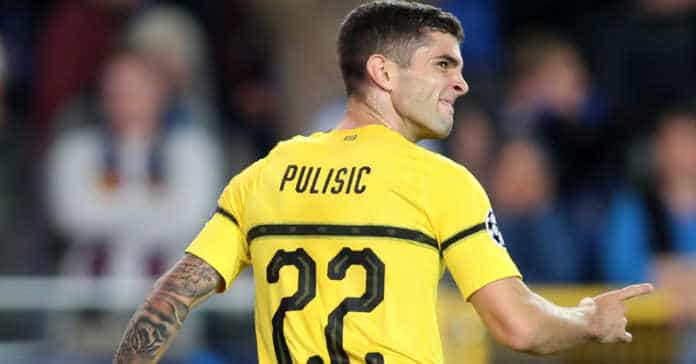 Christian Pulisic has signed for a fee of £57.5m, although he will remain in Germany on loan until the summer.

While the 20-year-old has mostly played as a right winger for Dortmund recently, he has experience of playing as an attacking midfielder, for both the USA and in his early Bundesliga days.

According to the Daily Star, Italian sports journalist Gabriele Marcotti was asked on The Game podcast if the American may play in the ‘Marek Hamsik’ role in Maurizio Sarri’s system – with Hamsik being one of two central midfielders either side of deep-lying Jorginho in the manager’s system during his time at Napoli.

Here is Marcotti reply: “Or the [N’Golo] Kante role?

“It’s weird because you saw Sarri come out the other day like ‘I don’t know anything about Pulisic, is he coming?’

“He’s not being cute, I think he just wasn’t expecting the question because he’s used to having a director of football who signs people for him and this is a guy he actually really wanted.

“The reason he wants him is that he’s a phenomenal athlete who works really hard.

“He’s one of those football nerd-types who goes and watches himself over and over again.

“He does this weird thing like his boots are a size too small relative to his running shoes or shoes he wears normally because he wants to have that sort of special sensitivity and close control and he does all these little things.

“He is a guy that another football nerd like Sarri will love, because he can sit there and be like ‘alright, these are the runs, these are the angles, this is how you press, you do this, do that’.

“He doesn’t necessarily need to play on the wing, he could play in one of those two pressing roles in midfield, he could also play as a centre-forward if necessary.

“We can debate the fee but I think it makes sense beyond that.”

Sarri has been on a regular basis playing Kante on the right of the midfield three, in spite of calls for him to play in more of a central, defensive role.

On the left side of three, Ross Barkley and Mateo Kovacic have been rotated, so Pulisic possibly will have a better chance of starting there than on Kante’s side, if Sarri chooses not to play him on the wing – where Eden Hazard, Willian and Pedro are presently the foremost options.