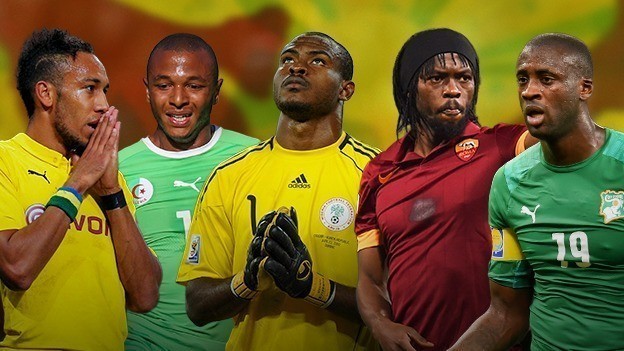 Who is the richest footballer in Africa? That question is quite a debatable one.

However, in this post, I have used data and facts that are in the public domain to determine who the richest African footballers are.

You can however find the top 10 richest footballers in Nigeria in this other article I made.

Football is a game Africans have a special love for.

The British, French, Belgian and Portuguese colonialists introduced the game of soccer to the individual countries they colonized in Africa about 100 years back.

Football clubs started emerging in Africa some 50 years ago and sponsorship was mainly given by big businesses and companies and at times government.

Only the best players from these football clubs were chosen to form national teams to shine at different international tournaments.

Thus, African footballers are now among the highest earners in the footballing world.

Now let me tell you who the richest African footballers are. I’ll list the top 10 as well as their net worth in 2019.

The Ghanaian, who plays as a central midfielder for Spanish club Albacete, started his football career professionally when he appeared at a youth tournament.

Muntari’s performance at the youth competition got him promoted to Ghana’s U20 and later moved to the Ghana national football team AKA Black Stars.

This successful African player is married to a Canadian-born Ghanaian businesswoman, Menaye Donkor.

Donkor is a philanthropist and former beauty queen who was named Miss Universe Ghana 2004 and represented Ghana in Miss Universe 2004.

Muntari has played for the likes of Deportivon De La Coruna in Spain, Portsmouth, Milan and some other notable clubs around the world.

His successful career in football makes him our tenth richest footballer in Africa with a total net worth of $5 Million.

The ninth richest player in Africa on my list is Congolese defender Christopher Samber.

The bulk of the wealth of this player with a whopping net worth of US $7 Million comes not from his football salary alone, but from his endorsement deals with Anzi Makhachkala where he earns $160,000 every week.

The defender, who plays for the Congo national football team, has played for many European football clubs like Hertha BSC, Blackburn Rovers, and Dynamo Moscow.

Though his country have never qualified for the FIFA World Cup but did win the Africa Cup of Nations in 1972. They also were the winner of the All-Africa Games football tournament in 1965.

Samber is wedded to Teresa Samba.

Seydou Keita is an ex-Malian footballer who started playing football professionally at the age of 17.

By the time he was 20, he started playing for Mali national football team.

The versatile midfielder, who operated as both a central or defensive midfielder, has appeared in about seven African Cup of Nations tournaments.

Keita most especially played for Lens and Barcelona, winning 14 titles with the latter club after signing in 2008.

With a net worth of US $10 Million, Keita sure deserve a position among the highest-paid African players in 2019

If this were a list of the best Nigerian footballers, John Michael Nchekwube Obinna would not be in the number seven spot; he’d probably be number one!

Mikel’s football career started at the age of 16 with Enyimba football club of Aba in Nigeria. His success in this club paved the way for him to play for Nigeria’s U-17.

His football career has been a huge success since then and went on to sign for Chelsea FC.

The Super Eagles skipper has played for some international clubs other than Chelsea, talk about the likes of Norwegian side Lyn Oslo and Chinese club Tianjin Teda.

Mikel Obi net worth of US $30 Million qualifies him to be the 7th richest footballer in Africa. John Mikel Obi investment in real estate and several other endorsements is where most of his wealth is from.

The Balck Stars of Ghana captain started his football career with Liberty Professionals.

Gyan scored 10 goals in 16 games for Liberty Professionals in the Ghana Premier League as far back as 2003.

The Ghanaian has played for several notable football clubs globally, including Udinese, Rennes, Al Ain, Shanghai SIPG and Asamoah Gyan current team is Kayserispor where he plays as a striker.

I’m sure you didn’t know Gyan has the second-highest fee paid (£13 million) among all transfers to Sunderland A.F.C.

Asamoah Gyan net worth is about US $31  Million. The majority of this colossal sum comes from the various Asamoah Gyan business and his Real Estate investments in Ghana and other parts of the world, talking about the likes of Baby Jet Promotion, Mama Vits Noodles And Rice.

Currently, he plays for Sabail FK, an Azerbaijani football club based in Baku.

Akosua Puni Essien is Michael Essien wife. Though there were rumours some months back that Michael Essien's wife Akosua Puni packed out of her matrimonial home over Princess Shyngle's affair with her husband.

Michael Essien net worth is estimated to be around $ 35 million.

Sheyi Emmanuel Adebayor is one of the fourth richest footballer in Africa as a result of the numerous lucrative contracts he benefited from the richest clubs in England.

The Togolese professional footballer was born in Lome, Togo in February 1984. He spent his youth playing for OC Agaza and Metz and currently plays as a striker for the Turkish club Istanbul Basaksehir.

Though Adebayor has played for the likes of Manchester City, Arsenal, Crystal Palace and Tottenham Hotspur as well as French side Metz, and Monégasque team Monaco and Spanish team Real Madrid in the past.

The talented player was voted as the 2008 African Footballer of the Year. He is currently the all-time top goalscorer for the Togo national football team with 31 goals.

Adebayor is known to have indulged in charity causes and has initiated many projects in Togo and across Africa and the SEA foundation that implements different welfare projects across the continent.

Emmanuel Adebayor net worth is about $45 Million.

Gnégnéri Yaya Toure sure does deserve to be mentioned as our third-richest footballer in Africa as he’s one of the finest African players with global recognition.

Toure began football with the ASEC Mimosas youth academy team in Cote d'Ivoire in the mid-90s.

He played for and captained the Ivory Coast national team and most recently played as a midfielder for Superleague Greece club Olympiacos. But currently, the Ivorian is without a club.

The 35-year-old Ivorian insists he is a long way off retirement and wants to continue playing for at least another two years.

The Former Manchester City midfielder is the brother of Ibrahim Touré and Kolo Touré, who is the Assistant Manager of Leicester City.

Yaya Toure net worth of $70 million dollars, plus his reported earnings of $15million a year, earns him the third richest footballer in Africa status.

There were claims in 2015 that Toure allegedly fathered a two-year-old secret love child with ex-girlfriend Mariam Camara.

Since his 2004 transfer to Chelsea at the age of 26, Didier Yves Drogba Tébily has signed a number of lucrative contracts.

He was paid a staggering $105,000 a week when he was at his peak with Chelsea, a figure dwarfed however by the whopping $325,000 he earned in his short spell at Shanghai Shenhua.

Though retired, Drogba, however, had a number of lucrative sponsorship deals but his actual earnings a year were far more.

Didier Drogba is the brother of Joël Drogba (Retired) and Freddy Drogba (Without Club). He is also the cousin of Severin Drogba (Unknown) and Olivier Tébily (Retired).

Isaac Drogba and Kieran Drogba are both Didier Drogba sons. Isaac plays as a forward for EA Guingamp U19.

Didier Drogba's net worth is estimated to be US $90 Million at the moment.

Top 5 Richest Female Footballers In Nigeria And Their Net Worth

Samuel Eto'o Fils is the richest footballer in Africa. He is currently one of the richest and most influential football player in Cameroon with an estimated net worth of $95 million with endorsements worth $3 M.

Eto, who plays as a striker for Qatar SC, was regarded by pundits as one of the best strikers in the world – when he was in his prime of course.

The Cameroonian was in fact once the highest-paid player in the world while he was with Russian football club FC Anzhi Makhachkala with a whopping $25millon a year.

Samuel Etoo's net worth is pegged at $95 million.

Note: The Net worth of these richest African footballers is not only based on their football earnings but on other endorsement deals and investments of the footballers.

Do you know a player who is supposed to be on this list of the top 10 richest footballers in Africa? Quote his name and net worth in the comment box for all to see.