Akwa United face off against Shooting Stars on Sunday in their first away game of the new NPFL campaign. A comprehensive preview of the upcoming fixture can be found in this Shooting Stars vs Akwa United prediction post.

After spending the last couple of seasons in the second tier of Nigerian football, Shooting stars are back amongst the big boys and will be keen to make a good impression in front of an expectant home crowd this weekend.

Having dropped two points in their opening fixture, Shooting Stars play host to Akwa United at the Lekan Salami Stadium this Sunday. 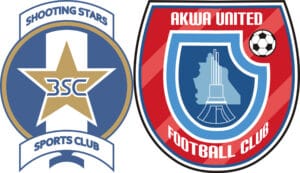 Shooting Stars secured an impressive away point versus Gombe United in game week one courtesy of a goalless draw at the Pantami Stadium.

Despite being on the back foot for major parts of the clash, Edith Agoye's men held firm to avoid defeat thanks in no small part to a resolute Godwin Dede between the sticks.

That stalemate leaves the Oluyole Warriors 11th on the log heading into their first home game this weekend.

Henry Ndedi received his marching orders for two bookable offenses last time out and the midfielder will not feature for Sunday's hosts.

Okanlawon Laide is the favorite to fill in for the aforementioned Ndedi as he serves his one-game suspension.

Akwa United picked up where they left off during the 2020-21 season with a 3-0 demolition of Kano Pillars at the Godswill Akpabio International Stadium.

Goals from Ezekiel Bassey, Stephen Chukwude, and Friday Ubong got Boboye Kennedy's men off to a perfect start in Uyo.

The defending champions currently lead the way albeit only on goal difference after the first round of matches as they look to make it back-to-back league titles.

Stephen Chekwude was subbed off five minutes after finding the back of the net due to a slight knock and may sit out Sunday's game.

Friday Ubong has scored four goals in his last five games and the 23-year-old is definitely one to keep an eye on in this one.

Down below are the Shooting Stars vs Akwa United odds for all three possible results at the sound of the final whistle:

There is little to choose between the teams judging by previous encounters with both sides picking up five wins apiece although it is worth mentioning that never has an away side come out on top in all 10 previous meetings dating back to 2012.