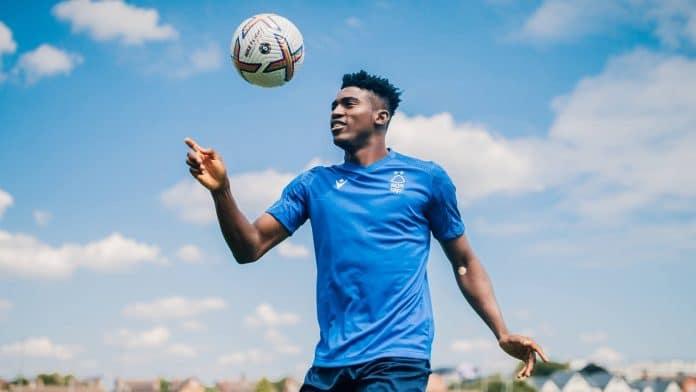 New Nottingham Forest striker, Taiwo Awoniyi can’t wait for the new Premier League season to start as he expects it to be a great campaign.

The 24-year-old signed for a club record €20.50m transfer from Union Berlin in the summer after scoring 15 goals in the 2021/22 Bundesliga season.

The former Liverpool man is looking forward to helping his side achieve their goal of preserving their Premier League status at the end of the season. The Reds have just returned to the topflight for the first time since 1999.

The Premier League starts this weekend and Awoniyi who has been handed the number 9 shirt at Forest is excited about his future at City Ground.

“To be honest, it’s a great project, it’s a great club, similar to Union Berlin. (It’s a) very great family club with a lot of plans. I believe at the end that the whole world will see the plans as well,” Awoniyi told Soccernet.ng.

“Every moment before I sign any document, I have to pray first because he’s the one that brought the opportunity. I was just praying and at the same time saying my wishes to God.”

Awoniyi will hope to find his scoring boots and he is one of six Nigerian players that will feature in the English top division this season.

“I am very excited; I am looking forward to it. It is something I am very proud of. I think it is a dream come true for me,” Awoniyi said.

Nottingham Forest will face Newcastle United on August 6 in the season opener before hosting West Ham at home on August 14.

This article was most recently revised and updated 2 days ago