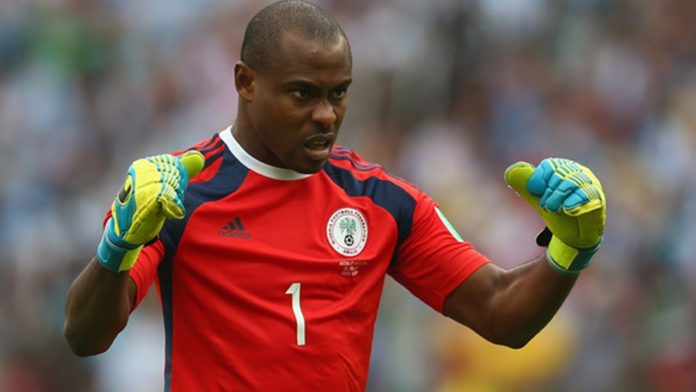 Vincent Enyeama is a popular name among Nigerians and is considered one of the best Super Eagles goalkeepers in the last two decades.

Apart from his heroics as a gal keeper, Enyeama is the most capped footballer of the Nigeria Football National team.

Enyeama played for several clubs and kicked off his career with Enyimba International, winning the CAF Champions League twice. He was the first-choice goalie of the team.

However, anytime Enyimba went to the shootouts, he was always substituted.

In a 2006 interview, he stated that he never knew why the coach didn't trust him enough for penalties.

After his time with Enyimba, Enyeama spent one year with Heartland F.C before moving to Israeli Club Bnei Yehuda Tel Aviv.

He spent two years with Bnei Yehuda and reached the final of the Israel State Cup.

In the 2009–10 season, Hapoel won the league and cup double, with Enyeama taking the spotlight on many occasions.

After his time with Lille, Enyeama moved to Lille in 2011 and enjoyed seven years with the club, though he was loaned in his first year to Israeli Club Maccabi.

He was recalled from Loan by Lille manager René Girard, who made him his first-choice goalkeeper over SteeveElana, the first-choice Goalkeeper under Rudi Garcia.

He played a total of 1062 minutes of Ligue 1 football without conceding.

Enyeama continued to feature for Lille up to the 2017/2018 season before disagreeing with the club management. He left the club in August 2018.

In 2019 Enyeama retired from football after failing to get a contract with Dijon.

Enyeama made his debut for the Nigeria national football team against Kenya in May 2002. He was the National team's first choice goalkeeper up to 2015 when he retired.

He became the most capped footballer in 2015 after making his 100th appearance against Uganda in a 1 – 0 loss.

Vincent won the 2013 Africa Cup of Nations with Nigeria, captaining the team for almost all of the matches as Joseph Yobo, Nigeria Captain, was always on the bench.

In June 2020, Vincent Enyeama got an appointment from France Club, Iris Club de Croix, to become their goalkeeper trainer/coach.

It stated that Enyeama would serve as a coach for the reserve team goalkeeper and the under-16 team.

Enyeama is still very active with the club and seems set to continue with them in 2022.

However, the salary structure with the team is unknown.

Enyeama was born on the 29th of August 1982 in Aba Abia State to Mr. and Mrs. Philip Enyeama, who both hails from UruaInyang of Ika local government area, Akwa Ibom State.

Vincent has a brother named Philip Enyeama, who, just like him, played for Nigeria and is retired.

In September 2015, Enyeama lost his mum, Mrs. Lucy Philip Enyeama, with the burial in their hometown.

The incident led to the fiery goalkeeper being absent from the 2015 African Cup of Nations qualifiers match against Tanzania.

Vincent married his wife, Promise, in a private wedding ceremony in June 2006, and the union is currently blessed with two girls and a boy.

Enyeama seems to be a happy family man as he is always seen to post his family pictures and celebrate their union happily.

During their 13th anniversary in 2019, he took to his Instagram to post a picture of himself and his wife.

He tagged her in the post and expressed his gratitude, stating how awesome she has been over the years and how she's a miracle in his life.

In June this year, the couple again celebrated their 15th anniversary, and Vincent took to his official Instagram account to explain why their union has lasted this long.

He stated that they have both never focused on their mistakes neither do they complain when they lack.

Instead, they have both nurtured each other.

According to Vincent, he married a very supportive woman and claimed that she had always stood by him at all times.

In October 2015, after Enyeama resigned from the Nigerian National team, Promise took to her Instagram account to support his decision.

She spoke of how devoted he has been to the Super Eagles due to his passion for the game and how he missed special family celebrations all to serve Nigeria.

She also spoke about how Vincent had to sometimes play even when he was going through pain or injuries.

Vincent Enyeama's wife further crowned it by telling him how proud she was of him.

During Enyeama's birthday celebration, Promise took time to post on her media handles about how thankful she was and shared pictures of both of them and their kids in celebration mode.

While his salary in Croix currently as a goalkeeper trainer is unknown, Enyeama Undoubtedly made a fortune following his seven-year spell with Lille.

He was stated to receive a yearly salary up to the tone of 2.8 million euros.

Also, he spent up to 19 years playing football.

While he has never opened up his Networth to the various athlete wealth checkers, the rough estimate of Enyeama's Net worth is pinned at $15 – $20 million from his playing career.

Vincent Enyeama is more open to social media than some of his counterparts.

But, most of his assets, such as Houses and Cars, are always kept out of the spotlight for reasons best known to him.

He does have a huge mansion where he and his family stays in Lagos.

However, only land assets are attributed to his name, with none of his other properties known.

The former Nigerian goalkeeper does not hesitate to flaunt his car collections when it comes to cars.

From what he has shown on social media, Enyeama owns two Range Rover Evoque; one in black and the other in lemon green.

He also owns a Chevrolet Camaro S.S., a Bentley Continental G.T., and a Mercedes-Benz C-Class Coupe.