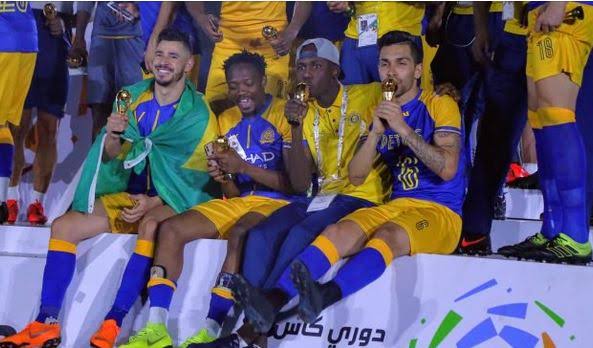 Super Eagles captain Ahmed Musa has started the new year on a positive note as his club Al Nassr beat Al-Taawoun 5-4 on penalties to emerge winners of the 2019 Saudi Super Cup on Saturday.

Saturday’s match in which the dashing winger was in action for 70 minutes was held at the King Abdullah Sports City in Jeddah, Saudi Arabia for the first time.

For the fleet-footed Musa and his teammates, they would be more than delighted breaking the jinx as this was Al-Nassr’s third appearance in the competition and their first in 4 years with no previous win.

Al-Nassr finished as runners-up in both the 2014 and 2015 editions of the Super Cup but for this year they claimed the ultimate prize.

On the other hand, this was Al-Taawoun’s first appearance in the Super Cup and will hope for better fortunes next time.

Saturday’s match was originally scheduled to take place in Abu Dhabi on 24 January 2020.

However, on 11 November 2019, the Saudi Football Federation announced that match would hold on 4 January 2020 in Jeddah to accommodate the Spanish Super Cup taking place in the same week and same venue.