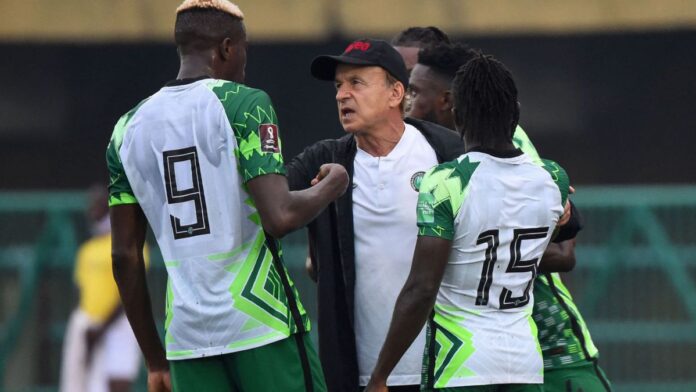 The second leg of the 2022 Qatar World Cup next year is upon us as the Central African Republic take on the Super Eagles of Nigeria at the Japoma Stadium in Douala, Cameroon but will DSTV or GOTV show the match?

The return leg was earlier billed to be played inside the Stade Barthélemy Boganda in Bangui, the capital city of the Central African Republic.

However, CAF later banned the CAR from hosting any World Cup qualifiers on home soil after deciding that none of their football pitches fit international matches.

34th-ranked Super Eagles surprisingly gave up their over two-decade unbeaten World Cup record on Thursday when they fell to a disappointing 1-0 defeat to the Wild Beasts at the Teslim Balogun Stadium in Lagos.

The Central Africans, through Karl Namnganda, netted a 90th-minute winner to hand the 124th-ranked team their first win of the series.

Nigeria still sit top of Group C with six points and could consolidate their grip with a win on Sunday.

What time and date does CAR Vs Nigeria kick-off?

What TV Channels will broadcast The Game On Tv?

The Nigeria vs Central African Republic clash will be shown by the regular suspects: DSTv, GOTv, NFF TV, AIT, NTA.

Where Is The venue for the clash?

The match will now be played at the Japoma Stadium in Douala, Cameroon.

The winners of each group in the second round of CAF qualifying will progress to the final stage of qualification when the 10 group winners will be drawn into pairs for a home-and-away two-legged playoff.

See the confirmed lineups of the Super Eagles here.