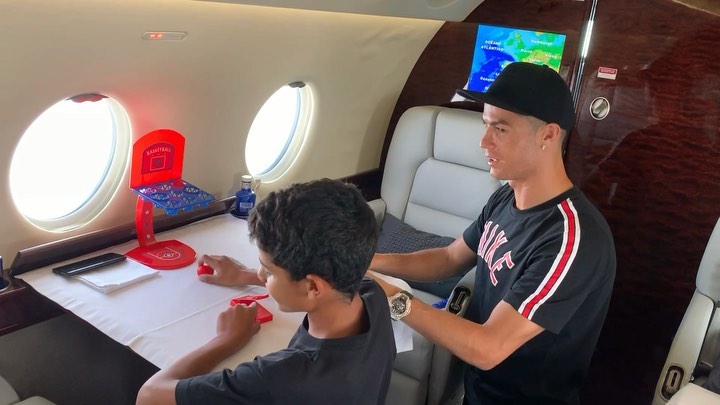 Cristiano Ronaldo is one of the few players who have acquired their personal private jets and the Portuguese striker was a having nice time with his son Roanldo, Jr inside the luxury jet.

The 34-year-old missed Juventus' trip to Lecce but did not miss cruising in the air with his nine-year-old son as he shared of video of both of them on his Instagram handle.

The video alone has gathered over a million likes by his fans around the world with 18,000 other supporters making different comments about the father and son relationship.

Ronaldo and his son were playing a toy basketball game together as they both aimed for holes above the rim.

“@jumpman23 Be careful we are here,” the Portuguese talisman wrote with an emoji of someone holding a ball, including a muscle and a laughing emoji.

But the Juventus star was not listed in Bianconeri's squad that faced Lecce away from home as they were held to 1-1 draw.

The Italian champions remain top of the table with a point after Inter Milan failed to take advantage of their slip-up as they were held to a 2-2 draw at the San Siro.