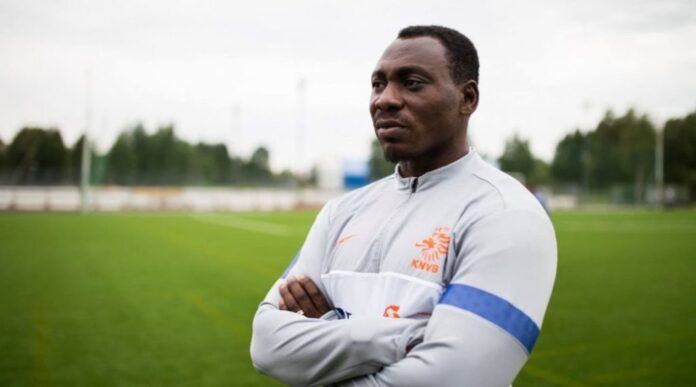 Mr. Amen Amokachi is from Ogbadibo local government area of Benue state and is an Idoma by the tribe.

Amokachi, nicknamed “The Bull,” has played for a series of clubs, including Belgian side Club Brugge.

He scored the first-ever goal in the Champions League (the tournament was reformatted and has maintained the same format to date) in the tournament-opening match against CSKA Moscow.

He played with Everton and went on to win the FA Cup with them in 1995, scoring two goals in the semi-final against Tottenham Hotspur.

He remained at Everton until the end of the 1995–96 season when he was transferred to Beşiktaş of Turkey for a fee of £1.75 million.

He, however, couldn't replicate his Everton success and soon left the team before retiring.

On the international space, Amokachi was a great figure with Nigeria when he played.

He also helped win the Olympic gold medal in 1996, scoring in the Gold Medal game itself against Argentina.

Amokachi sustained an injury just ahead of the 1998 FIFA World Cup, played one match at the tournament, but struggled with knee problems thereafter.

His international career ended not too long after the tournament.

Daniel Amokachi met his wife Nadia, who was a supermodel in the 1994 African Cup of Nations in Tunisia.

He wedded the Tunisian model in 1995, and the marriage has been blessed with three kids, with the first being an all-boys twin and a twin.

They got their first real recognition at the age of 20 years after being asked by Besiktas to join their reserve team in 2016.

Amokachi expressed his delight about the situation and announced that his son had signed a one-year deal with the Turkish club on his Facebook page.

He posted photos of the twins wearing the oﬃcial jerseys but stopped short of revealing the ﬁnancial details of the deal.

The twins Kalim and Nazim, who successfully impressed the club's management following a one-week trial in Istanbul, officially joined the club U-21 team.

After a couple of months with the Club, Amokachi discussed with his twins and requested that they forfeit their contract with Besiktas and instead move to Kwara United, one of their Native country's indigenous football clubs that participate in the NPFL.

The move, according to Amokachi, was a strategic one that would give his boys the exposure they need for Elite Europe clubs to come knocking.

Kwara United Head coach expressed his joy in having the twins in the club and said he had always been an admirer of the twins and was impressed with their youthful energy.

Raya Amokachi, the only daughter of the family, is a gymnast who graduated from Finland's Oulu International School in May 2020.

She is based in Finland with her mom, while Amokachi and the twins are in Nigeria, though the latter gets to travel a lot to give his attention to his family abroad.

Daniel Amokachi was nicknamed ‘The Bull' because of his physical strength, speed, and technique.

Daniel Amokachi was asked in an interview with Brila FM to choose between Jay jay Okocha and Mikel obi.

In response, he stated that he remembers playing alongside Okocha in a World Cup match held in Italy where Jay jay made history with the most dribbles.

He said when Jay jay takes the ball that his opponent wouldn't see the ball, and his passes were excellent, and as such, he considered Jay jay his best any day, any time.

As a footballer who achieved so much in his time, Daniel Amokachi was undoubtedly a rich footballer.

During his interview with Brila FM, he spoke about owning a private jet.

He explained that he was in Nigeria to visit his sick mother when he played football for the Besiktas and his team had a very important match to play in Istanbul, Turkey.

At that time, the President of the club was trying every means to bring Daniel to Istanbul, so private jets were sent to Kaduna to pick him up, and he was ﬁnally able to be part of the match and his team won.

After the match, the President of the club, Daniel's friend, asked if he would love to own a private jet.

He said yes, so the President contacted the airline business owners in America and asked Daniel to call them whenever he was ready.

Daniel said he contacted the company and all he needed to do was have his name on the airline, and whenever he needed them to pick him up, they would do just so.

Finally, he acquired the private jet, but after his playing days, which led to a subsequent drop in his income, Daniel found it difficult to keep with the plane Maintainance and had to sell it to evade the cost for maintenance, parking, and clearance.

Daniel Amokachi tries very well to keep his properties private, and as such, there is not so much revelation on his houses and cars.

However, there is no doubt that he owns a house.

During the 2019 re-election campaign for President Buhari, Amokachi, an avid supporter of the President, dedicated his house at Rana Road Kaduna for campaigning purposes.

He didn't stop with just his house and also converted his G wagon into a presidential campaign vehicle for the President, which the ruling party APC shared on their oﬃcial Twitter handle.

Following the Election displays by Amokachi, what is known is that the former Super Eagles player has at least two houses (in Kaduna and Finland) and has at least a car to his name.

Daniel Amokachi was appointed as Nigeria's football Ambassador in 2020 to help assist the federal ministry of youth and sports development discover football Talents in Nigeria.

He is still active in the position and is likely to continue until a change is effected.

Daniel Amokachi's net worth is not publicly known as he no longer plays football.

Still, his achievement through football, coaching, and the appointments and short-term contracts enjoyed by the current Nigerian government puts him in a good position financially.

Based on estimates, Amokachi is believed to be worth one million to ﬁve million dollars.