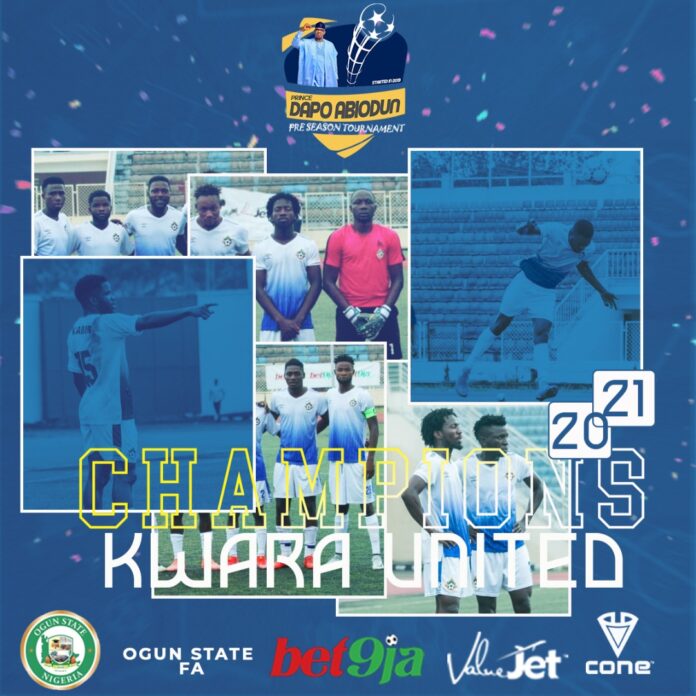 Kwara United have emerged as champions of the 2021 edition of the Dapo Abiodun Preseason Cup after defeating Shooting Stars on Wednesday at the Dipo Dina International Stadium, Ijebu-Ode.

Shooting Stars, the defending champions in the last two editions of the competition, lost 5-4 on penalties after Aiyenugba saved Taofeeq Malomo’s shoot during the shoot-out that ensued as the regulation time ended goalless.

It was the second time the Ilorin based club are facing Shooting Stars having lost to the NPFL newcomers in opening match of the competition and this time, they got the better of Shooting Stars.

Kwara United lost the advantage of taking the lead in the highly explosive encounter on Wednesday evening, as the game finally ended goalless after regulation time.

As a result, the winner had to be decided via spotkicks and it was the Oluyole Warriors who ended on the losing side after losing 5-4 on penalties.

Former Super Eagles goalkeeper, Dele Aiyenugba, was the hero for Kwara United as the Afonja Warriors put an end to Shooting Stars’ reign as the champions of the Dapo Abiodun Pre-season tournament.

Speaking after Kwara United's triumph, General Manager of the club, Bashir Badawiy said that the team will continue with its preparation ahead of the 2021/2022 NPFL season by taking part in another preseason tournament and will work hard to surpass last season’s records in the league.

He also thanked Governor AbdulRahman AbdulRazaq for his support to the team, even as he commended the players and coaches, for winning the trophy.