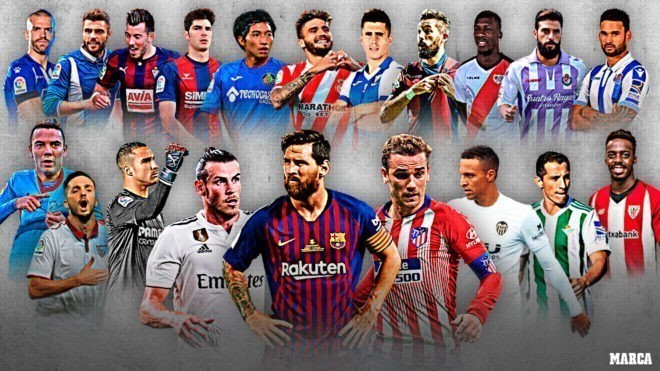 The 2019/20 season isn’t officially concluded but suspended because of COVID-19.

Sport360 put together the Team of the Season for each of Europe’s top five leagues to acknowledge the players who have performed admirably during the course of the normal campaign.

In this edition, 22 of the best performing players in La Liga were picked and  narrowed down to the best XI using polls on their Instagram Stories.

Here’s what the La Liga Team of the Season looks like:

Jan Oblak remains the top goalkeeper in La Liga. The Slovenian apart. He has 11 clean sheets to his name this term.

The Frenchman is arguably the biggest reason for Madrid’s defensive excellence this term.

Clement Lenglet has out-performed his more celebrated centre-back partner this season. He boasts the farthest ball progression per minute at 6.18 metres.

Sergio Reguilon, on loan from Madrid, has impressed down the left flank. The left-back has registered four assists and a goal during his time at Estadio Ramon Sanchez Pizjuan.

With a league-high 201 interceptions this term to go with three goals and two assists, it’s easy to see why the Brazilian is among the finest anchormen in the game.

The playmaker has been in great form for the Yellow Submarine, pulling the strings in the middle of the park. The former Arsenal midfielder averages 2.3 key passes per game.

Lionel Messi is hardly in his finest season in a Barcelona shirt, but he’s still the least surprising inclusion.

With four goals and five assists in La Liga, the young playmaker has been a standout performer for La Real, putting them in contention for a Champions League spot.

Lucas Ocampos has taken on the mantle as top scorer for his side, netting 10 times this season and providing two assists. He also ranks third in the league for dribbles with 118.

The Frenchman has led from the front this season. With 14 goals and 16 assists, he’s the man that comes closest to Messi.