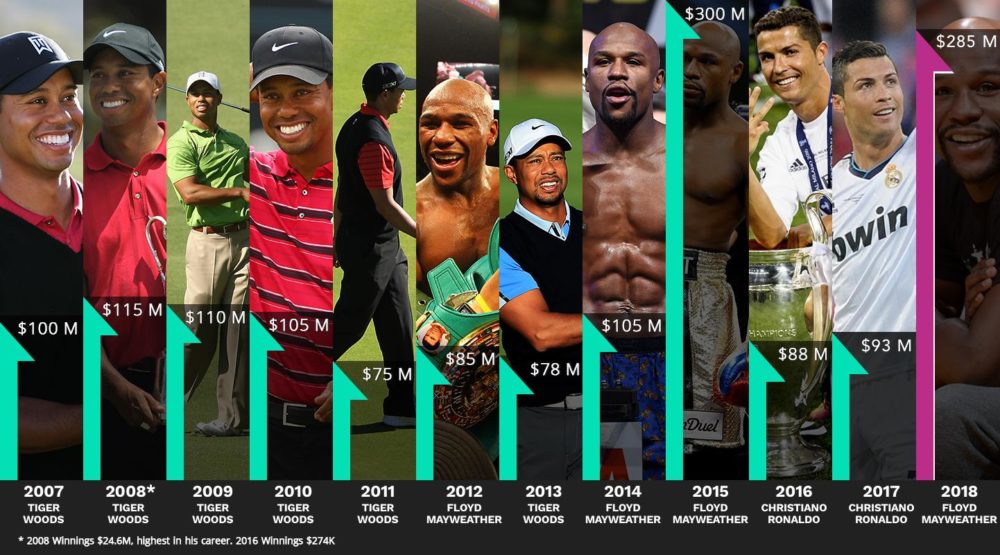 The annual ranking of 100 Highest Paid Athlete In The World has been released by Forbes, who collectively earned $4 billion over the last 12 months, up 5% from last year’s earnings of $3.8 billion.

Lionel Messi was named the highest paid athlete in the world for the first time, up from second place last year, with $127 million in total earnings.

Messi displaces Floyd Mayweather, who held the top position last year and was the leader four times in seven years.

Behind Messi is longtime opponent Cristiano Ronaldo, who got $109 million between his salary and endorsements.

Serena Williams returned to the ranking after no women appeared in 2018.

Endorsement income experienced an increment of 12.5% to $987 million this year.

“The global impact of soccer is clearly reflected in earnings in 2019, with the top three athletes on the list being Messi, Ronaldo, and Neymar,” said Kurt Badenhausen, senior editor, Forbes Media.

“But basketball players continue to dominate the top 100 overall with 35 athletes on the list earning a total of $1.29 billion, with 72% of that income coming from salaries rather than endorsement deals.”

The list of elite athletes consists of players from ten different sports. NBA stars lead with 35 basketball players among the top 100, down from 40 in 2018, headed by LeBron James.

Football was the next most-represented sport with 19 players, followed by baseball with 15, and soccer with 12.

There are 25 different nations represented on this year’s World’s Highest-Paid Athletes list, up from 22 in 2018.

Americans rule the action with 62 athletes thanks to the sky-high salaries in the major sports leagues.

The U.K. has five athletes, France and Spain have three, while Brazil, Canada, the Dominican Republic, Germany, Serbia and Venezuela all have two.

Endorsement incomes are an estimate of sponsorships, appearance fees and licensing incomes for the same 12-month period based on conversations with dozens of industry insiders.

Taxes or agents’ fees not deducted, and investment income not included.

Those are the highest-paid athletes for the year 2019.