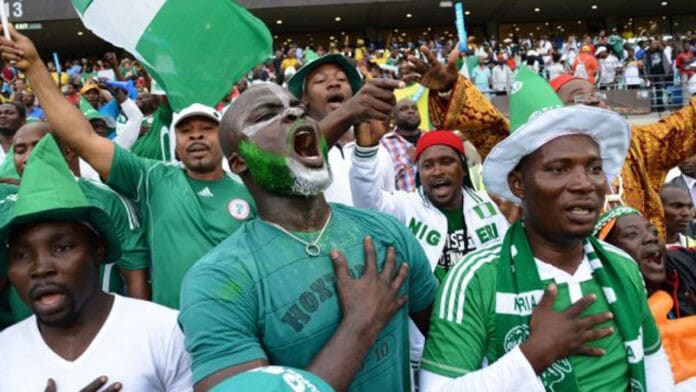 Dr. Rauf Ladipo. That name. If you want to know how to join the Nigeria football supporters club and you don’t know that name, then you must be a LEARNER!

As far back as I can remember, I’ve always known that name to be the Chairman of the Nigeria football supporters club. Come to think of it, is it his birthright?

Well, I’m not here to throw jibes at anybody. Back to the lecture at hand.

Oh, so you think the moment you put on some green and white shirt to the stadium on a matchday you have automatically become a member of the Nigeria football supporters club.

Yes, they may allow you to join them in enjoying all the thrills that go on with supporting Nigeria national teams to victory but you’re still not a MEMBER.

There are laid down procedures you must follow to register and be accepted.

Before that, let’s see how the club came about.

The Nigeria Football Supporters Club was founded in 1956 by football-loving Nigerians drawn from different walks of life ostensibly to support the Green Eagles, as the Super Eagles were then known.

However, it has witnessed lots of remarkable changes in the last four decades especially when Ladipo emerged first as the National Chairman and later as the NFSC President-General Worldwide.

Several accolades can be ascribed to the NFSC across the world, including being described by world football ruling body, FIFA as the most disciplined and entertaining football supporters during the 1994 World Cup in the USA.

The club has members spread around different parts of the world and with large and active membership in about 25 states in Nigeria.

They have continued to grow bigger and better with the emergence of Ikpea, who was its former Secretary-General, and now the National Chairman at the elections held on December 10th, 2016, in Lagos.

Enough of that, back to the procedures on how to join the Nigeria football supporters club.

You can see how to join the Nigeria Football Federation (NFF) here.

I tried finding out, but I don’t think there is any known Nigeria football supporters club official website anywhere for you to apply online.

Analogue? You just have to take that long walk to the NFSC office.

Fill the form and choose the category of membership you want.

Let me break down the category membership available.

They are two levels of membership:

The ordinary membership simply means you are a domesticated supporter who will be allowed to participate in any sports event within Nigeria and the West African sub-region that can be travelled to through land.

You don dey vex? Them collect money for ya hand? Mtweeeeeeeeeeeeeech!

But when you choose international membership, you are granted access to travel with the supporters club to international sporting events. This can include the Olympics, World Cups, African Nations Cup etc.

However, International membership comes with an annual due of ₦50,000 (Fifty Thousand Naira). Also, you must be able to foot the bill of a large portion of your travelling expenses.

Now here’s the catch for the Ordinary members, in cases where sponsor(s) volunteer to pick bills for the supporters club, a number of the оrdіnаrу members are chosen tо travel wіth thе others. Most times it is the active members, instrumentalists аnd human mascots that are selected.

I have shown you how to join Nigeria football supporters club, so make that move now.