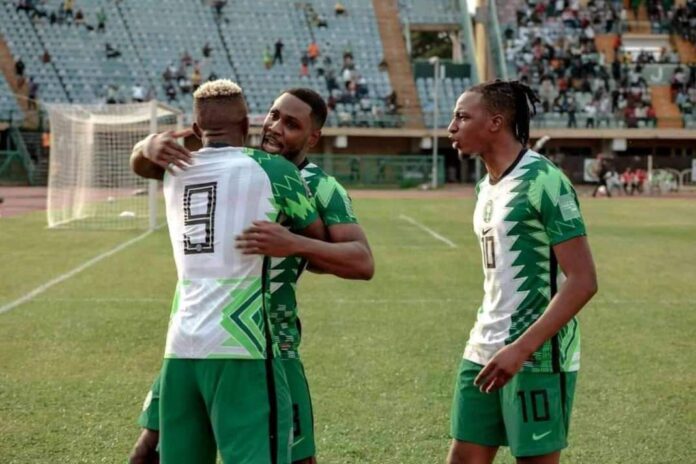 Ighalo has predicted that within the next three years, Osimhen would be playing in the English Premiership.

The forward joined Napoli from Lille for a club-record fee of 70 million euros.

Odion Ighalo was back in the national team, and it generated a lot of debate, with the striker refuting claims he paid his way back into the team. The Super Eagles performance caused a reaction amongst the fans as they called to question the suitability of Gernot Rohr for the team.

The displays by the team were lacklustre and laborious as the team struggled to win games. The loss to the Central African Republic at the Teslim Balogun Stadium in Lagos sticks out like a sore thumb. It has raised fears that the Super Eagles may not qualify for the FIFA World Cup in Qatar next year.

While the seeds of doubt have germinated, Odion Ighalo sees a spark in the team. The former AFCON top-scorer believes Victor Osimhen is heading for the top.

Following his return to the Super Eagles, where he paired with Victor Osimhen, Ighalo has praised the Napoli forward and predicted that in the next three years, Osimhen would be plying his trade in the English Premier League.

The performance of the former Lille star in the French Ligue 1 attracted interest from top Premiership sides like Tottenham Hotspur, Manchester United and Chelsea. Arsenal and Liverpool were also credited with an interest in the striker but beaten to the punch by Napoli. Napoli secured the Nigerian striker with a club-record fee of around 70 million euros.

Ighalo confessed that the lack of game time at the 2019 Africa Cup of Nations was a source of frustration for Victor Osimhen but advised the 2015 U17 World Cup Golden Boot winner to take things in his stride as his chance would come.

There exists a rapport between Ighalo and Osimhen in the form of a mentor-mentee relationship. Ighalo once travelled to Belgium in February 2020 to see his protégé make his European debut against Club Brugge.

The Al-Shaba striker was happy Osimhen finally came into his own as he predicted. The Napoli forward has bagged for club and country 47 goals in the last two years.

Ighalo spoke to King Ekong's YouTube channel, where he expressed his delight and pride in Victor Osimhen. He said he was in touch with the striker and always encouraged him. He claims to have advised the young forward to remain humble.

Ighalo also said that he told Osimhen that he was leaving the number 9 shirt for him. He said that with self-belief and hard work, Osimhen would make an impression on the team.

The two players shared the same pitch for the first time when Nigeria hosted Cape Verde in Lagos for the final group match of the FIFA World Cup qualifier 2022.