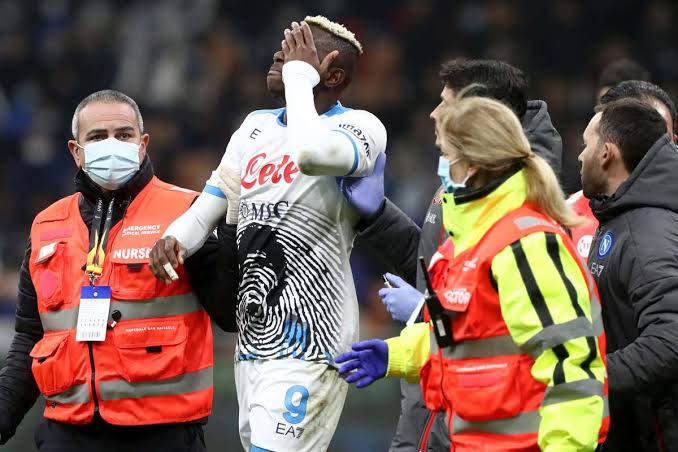 Napoli fear that Victor Osimhen may have fractured his cheekbone after a clash of heads with Milan Skriniar.

The unfortunate incident happened in the 3-2 loss to Inter Milan on Sunday.

Napoli have enjoyed a brilliant season so far as they chase their first Scudetto since 1990. Their title quest hit its first bump of the season as they fell 3-2 to the defending champions Inter Milan on Sunday. The defeat slowed the team a bit, but they remain top of the Serie A table as title rivals AC Milan also lost over the weekend to Fiorentina.

The defeat to Inter was Napoli’s first this season and the third game where they dropped points. With 32 points from 13 matches, the Partenopei Gil Azzurri remain on course for the Scudetto.

While moaning the loss of the available three points to Inter, the cost of the defeat might go beyond the points at stake. Perhaps, considered a blip, the long term ramifications of the loss could reverberate long after the game.

There are fears over the health status of Nigerian striker Victor Osimhen after the tie.

Following the loss to Inter Milan on Sunday, Napoli fear that Victor Osimhen may have fractured his cheekbone during the tie. The injury occurred when Osimhen had a head clash with Inter defender Milan Skriniar.

Osimhen, who has led the line admirably for club and country, staggered off the pitch after the clash of heads. He looked dazed and had a swollen face as he was escorted off the pitch at the Stadio Giuseppe Meazza on Sunday.

⭐️What happened?
👀 How bad is it?
⏳When could he return?
🔑 One long-term concernhttps://t.co/JUMiMr6Irp

The clash was purely accidental, with no malice attached. The incident occurred as both players went for the ball, but Osimhen came off worse as he got caught on the cheekbone by the back of Skriniar’s head. With a swollen eye, cheek and a dazed look, it suggests a possible fracture.

Osimhen was pivotal to Napoli;s success

The result of the injury has hit Napoli hard as the Nigerian international is the club’s topscorer, accumulating nine goals in 13 appearances in all competitions. The striker has been brilliant this season as he has scored in both the Serie A and the Europa League.

Head injuries are not strange to Victor Osimhen. Last season, the 21-year-old landed awkwardly and was knocked out cold after hitting his head on the floor. The injury last season brought about a loss of memory that kept the forward out for several weeks due to concussion protocols.

Napoli will hope that the injury is not as bad as it looks as the matches are coming in thick and fast, with the club needing their best players. Unconfirmed reports have already ruled out the forward for a month, in what could be a blow for Napoli and even Nigeria.

Osimhen will surely be out as Napoli play Lazio next weekend with another trip to Sassuolo on the 1st of December. These fixtures come up after their trip to Spartak Moscow on Wednesday.