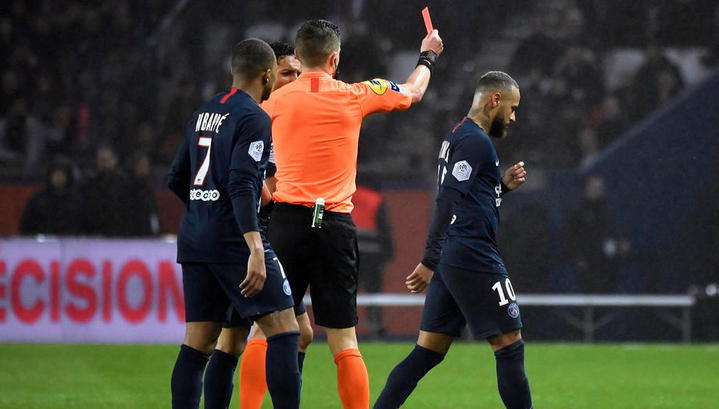 Neymar was shown the red card after receiving two yellow cards during PSG's 4-3 win over Bordeaux in Ligue 1.

The Brazilian forward was booked for arguing with the referee over a decision at the end of the first half and was then given his marching orders for a lunge from behind on Bordeaux's Yacine Adli in injury time.

Neymar sarcastically applauded the fourth official as he left the pitch and will now face a one-game suspension, meaning he will miss PSG's home match against Dijon on Saturday.

Bordeaux took a surprise first-half lead through Hwang Ui-jo, but Edinson Cavani equalised before Marquinhos gave his side the lead.

Pablo brought Bordeaux level just before half-time but Marquinhos scored another before Kylian Mbappe made it four, and although Ruben Pardo scored late on to give Bordeaux hope PSG got the better of them.

It has recently been reported that Neymar is considering signing an extension to his current deal at PSG despite speculation continuing to link the 28-year-old with a return to his former club Barcelona.

But Spanish publication Mundo Deportivo claim his happiness at Parc des Princes has improved, and he is contemplating remaining in the French capital.