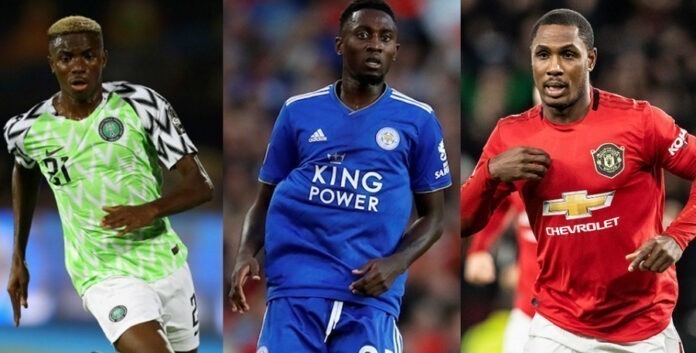 The global market has taken note of Nigeria's evergreen exploits in the game of football as the Nation has continued in producing talented wards like Henry Onyekuru and Kelechi Nwakali to name but a few.

Nigeria’s record in the game has become a big brand on the African continent.

While the generation of Nwankwo Kanu and Austin Jay-Jay Okocha is far gone, the present names are waxing strong in terms of the transfers in Europe.

And with the game becoming more lucrative than ever, there are certain players who are the top-earning personnel as regards Nigerian players abroad.

On this note, Goalball live.com takes a look at some of them.

Nigerian forward Odion Ighalo has gone up to be among one of Nigeria top-earning footballers in Europe.

He’s got into this rank owing to his move to Manchester United where he was meant to receive a whopping sum of money from the Manchester side.

However, following the expiration of his loan at the club, he’s returned to the Asian side (Saudi club) Al Shabab.

He’s been in fine form for them and it’s been drawing interest to the National team handlers in view for a possible return.

After all, Gernot Rohr’s Super Eagles are not certain of a player that can deliver the goals in the absence of the teams' first choice strike (Napoli’s) victor Osimhen.

The young lad has risen up the ladder following his move to Serie A table-toppers SSC Napoli.

He joined the club on a record fee of about 50m plus add one from the French club, Lille LOSC.

He’s been an amazing player for club and country and barring injury his stock is expected to rise up the radar as he continues to hold sway the No 9 shirt for both club and country.

Playing for a team like Napoli and Nigeria is not a small feat and sealing the first-team shirt on those two teams is proof of the talent he’s made of as we look forward to more dealings from the young lad Osimhen along in the season.

The Nigerian midfield man is a mainstay at Leicester City following his ultimate move from RC Genk in January 2017.

The move to the EPL has done so much good for Wilfred Ndidi whose profile has been on the rise for the last couple of years.

He earns profitably well at the King Power Stadium.

While he’s been subject for transfer in recent times alongside James Maddison in Leicester transfer talks.

He’s is one of the big guys of Nigerian football and it’s no secret as to how he’s been prominent based on the paycheck he takes home for sure.

The ex-Nigerian international Victor Moses has moved from Chelsea to join Antonio Conte at Inter Milan then.

But after the Italian giant failed to keep him in their squad, he was duly signed by Russian giants Spartak Moscow.

There he’s making it big as he slotted well into Sparta's plan for the season.

And playing in Europe would be an added incentive to the skilful forward couple with the fat check he receives from the Russian employer.

As long as he’s in the top form such a feat would be reflecting on his take-home pay as the club count on a couple of their players for a successful season.

The talented forward whose position is tough to fathom has become an integral part of manager Brendan Rodgers plan at the club.

Scoring against Crystal Palace was a reminder of his goals scoring attributes even as it made up as one of the birthday significance he’s had in the period.

He recently signed a new contract at the club following his fine form last season And that could see the player pocket a huge dividend on this stance.

While his weekly wages would be around £60K per week as Iheanacho's contract runs up till 2025.