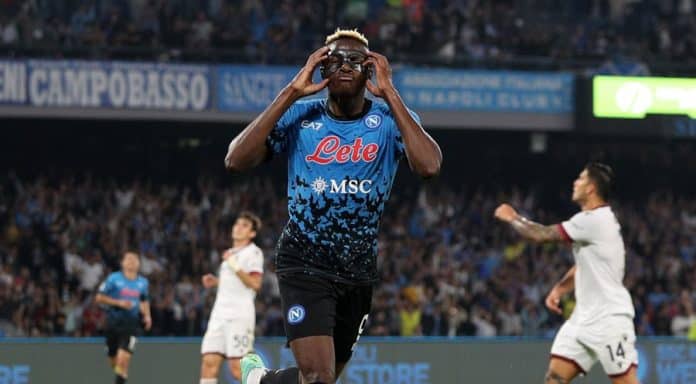 Italy and AS Roma legend, Francesco Totti, ranks Napoli striker Victor Osimhen as the best striker in the Serie A.

Speaking on BepiTV1, Totti said, “The strongest striker in Serie A? In my opinion, it is Osimhen. First, because he (Osimhen) scores, when the ball falls to him he scores.

“And then he makes himself available to the team. He is always in the right place at the right time.”

Totti was a key member of the Italian squad that won the FIFA World Cup in 2006.

Osimhen has had to battle injuries, suspensions, and coronavirus-related problems since his move to Italy. He was able to manage 10 goals and three assists in 30 appearances in his debut season.

That performance was improved upon the following season, as he notched 18 goals and made six assists in 32 games for the Partenopei.

So far this season, the 23-year-old has bagged 10 goals in 14 appearances across all competitions.

Udinese centre-back Jaka Bijol says Napoli’s Victor Osimhen is the toughest striker he has faced in the Italian Serie A this season.

Osimhen has been fantastic for the Partenopeans since last season and has established himself as a prolific player for them, scoring 28 goals in 46 appearances since then.

The Nigeria international scored a goal in Napoli’s 3-2 win over Udinese in November in a Serie A clash.

Meanwhile, the 23-year-old Slovenian defender said Osimhen’s strength, pace and pitch management made it difficult for him to keep him quiet during the game.

“I had a difficult life in the last match against Napoli. Oshimen is a really strong striker. He is fast and knows how to move well, “Bijol told Tutton Napoli

He is on course to make history with Napoli, as they hope to end over 30 years of wait to win the league.